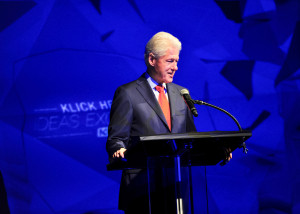 One of the highest-powered events of the BIO 2015 convention in Philadelphia didn’t actually take place in the convention center itself, but up the street from the convention center at the National Museum of American Jewish History, at Klick Health’s inaugural Ideas Exchange event. The invitation-only event, co-sponsored by BIO, Klick Health, Google, and Veeva Systems, brought together visionary leaders with the nation’s top biopharma CEOs to explore how emerging technologies and data can radically change the way health care is delivered and how health care companies work.

President Bill Clinton, billed as the keynote, attracted a frenzy of coverage from local news outlets, but other luminaries included Dr. Eric Topol, director of the Scripps Translational Science Institute in La Jolla, Calif., author of “The Patient Will See You Now” and the keynote luncheon speaker at BIO on Wednesday; Dr. Ezekiel Emanuel, speaker on healthcare reform and the transformation of American medicine; Dr. Ron Cohen, event co-chair, incoming chairman of BIO, and CEO of Acorda Therapeutics Inc.; Janet Woodcock, director of the Center for Drug Evaluation and Research at the FDA; Dr. Daniel Kraft, inventor and entrepreneur, and founder of Bioniq Health, which is focused on enabling connected, data driven, and integrated personalized medicine; Bob Hariri, CEO of Celgene Cellular Therapeutics; Martine Rothblatt, founder of Sirius XM Radio; and management gurus Tom Peters and Gary Hamel.

According to Klick CEO Leerom Segal, “Health and technology are advancing at such an exponential rate and we’ve arrived at an amazing inflection point in their convergence. “Ideas Exchange will touch on cutting-edge ideas and technologies that are shaping the future of digital health—from 21st century cures, personalized medicine and reimbursement to organizational design and leadership.”

For many attendees, President Clinton was the major draw. After apologies for being two hours late, Clinton spoke of the work of the Clinton Foundation, and gave a shoutout to outgoing BIO President and CEO Jim Greenwood, former congressman representing the 8th District of Pennsylvania. “He is what is rapidly becoming an oxymoron in national politics, a moderate Republican,” Clinton said. “And I appreciated the way we were able to work on various things.”

On the topic of managing growth in a sustainable way, Clinton talked about the lessons he learned from The Clinton Foundation, which for several years was the fastest-growing organization of its type in the world. “It’s a constant challenge to manage growth without losing the vision that animated the company in the first place, and what worked best, I believe, is a culture of constant commitment to the mission, constant creativity, and constant cooperation,” he said. “There’s a mountain full of social science evidence and scientific research that shows groups of people make better decisions than lone geniuses. And I say that with some humility, If the IQs in this room were translated to pounds, the floor would collapse. But it’s really true.”

Clinton pointed out how Klick was cited as one of the 10 most admired corporate cultures, one of the 10 best employers, and one of the 10 best places to work. “This counts for something,” he said, adding that the trend that has placed shareholders over stakeholders (such as employees) has eroded corporate and workplace cultures. He called out the loophole in the U.S. H-1B visa program that allows foreign contractors to apply for large numbers of these visas and gave a major employer the opportunity to lay off 250 tech workers, whose severance relied on training their Indian replacements. (Senator Bill Nelson of Florida has called for an investigation of the abuses of the H-1B visa program.)

In raising the numbers of H-1B visas while he was president, Clinton said the intent was to benefit biotech and other STEM industries to allow talented graduate students to be employed by U.S. companies. Replacing U.S. workers with contractors, however, “is not the culture I believe is productive for America over the long run.”

Clinton advised the corporate leaders in the audience that “The best companies have to do three things at once. You’ve got to pursue the mission that you got into business to do in the first place; you have to manage the day-to-day, including the incoming fire. And the third thing I think is important to do is we all have to keep taking some time out to look down the road and around the corner, to think about the future. Imagine what I think it’s going to be like 10 years from now, and even if I am not here, what I hope would be happening.”

Clinton’s speech not only went into management issues, but touched on the future of agriculture as poor countries face mounting challenges in feeding their people; and the recent Ebola epidemic, which shows the need for establishing healthcare systems in African nations without one (in contrast to its neighbors, Nigeria only had one case of Ebola since it showed up in the wealthiest area of the country, which has good healthcare, and workers were able to track down and isolate everyone the patient had been in contact with).

He also joked about the change in the meaning of some words in the modern world. “Lee [Segal] stood up on this stage and said I was a disruptor, did you ever think that would become a popular word? I was a disruptor in grade school too. All that got me was bad grades in conduct.”

Positive disruption is great, “but in an interdependent world where all borders look more like nets than walls, we can’t escape the intrusion of negative forces,” Clinton said. “But very often, just as there are no final victories, there are no final defeats, you just have to keep working to elevate the positive and reduce the negative forces in our interdependence.”

Negative forces include too much inequality in access to education, healthcare, and capital employment and income; too much instability, with the global financial crisis a prime example of this instability was reinforced by global interconnection; and the unsustainable use of energy and local resources.