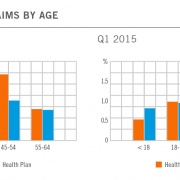 In what may slow the growth of premiums for Americans purchasing coverage on public exchanges under the Affordable Care Act, a new report shows 2015 enrollees using fewer prescriptions than those who signed up for coverage in 2014. Express Scripts (ESRX), one of the nation’s largest managers of prescription drugs, said the number of new […]

Drug and medical-device makers paid $6.49 billion to U.S. doctors and teaching hospitals during 2014, according to the federal government’s first full-year accounting of the breadth of industry financial ties with medical providers. The tally comprises company payments to more than 600,000 doctors and 1,100 hospitals for services such as consulting, research and promotional speeches […]

Baxalta Incorporated, a pharmaceutical spinout of Illinois-based Baxter International (BAX), finally launched with hopes of fielding 20 new products by 2020, the company announced this morning.   The new company, which trades under the BXLT ticker symbol, will focus on developing products for the hematology, oncology and immunology markets. The launch of Baxalta has been […]

Banks, investors and big drug companies should consider creating a 10-billion-pound ($15.7 billion) “megafund” to help biotech firms in London and across Britain compete with U.S. rivals, London mayor Boris Johnson said on Thursday. Britain is a leader in academic scientific work and also home to two of the world’s top drugmakers – GlaxoSmithKline and […]

Biogen Invests in the Greater Zurich Area: Biopharmaceutical Plant in the Canton of Solothurn Planned ZURICH, July 1, 2015 /CNW/ – Biogen Inc. (NASDAQ: BIIB), one of the world’s leading biotechnology companies, is investing one billion Swiss francs in Luterbach in the canton of Solothurn in a new production plant. Up to 400 new jobs […]

U.S. doctors and research hospitals collected nearly $6.5 billion in payments for services rendered to pharmaceutical and medical device companies in 2014, according to the Centers for Medicare & Medicaid Services (CMS) Open Payments report released on Tuesday. The report, in its second year, lists 11.4 million payments to 607,000 physicians and more than 1,100 […]

A team from Uganda’s Makerere University is the only African winner in the 2014-2015 Big Ideas Contest for its app that could aid in early detection of pneumonia. The app, which won Makerere a tie for second place in the global health category of the contest, combines a cell phone prototype with specially developed cell […] 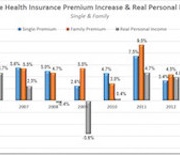 In every budget, we can control what we pay for some items while others are out of our control. Health insurance premiums are one of those items over which the consumer has little or no control (outside of raising the deductible or changing to an inferior plan). In this article, we’ll look at the rise […]

In the U.S., preventable risk factors still account for 50 percent of deaths from cardiovascular disease among adults age 45 to 79, according to a new analysis. But even if every state brought levels of those risk factors – such as obesity and smoking – down to the best level any state has so far […]