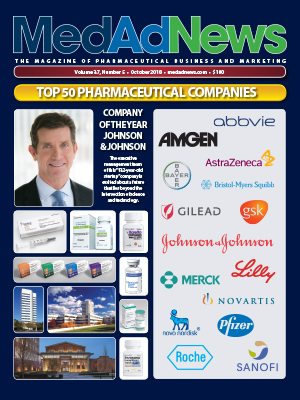 The top pharmaceutical companies are trying to proactively tackle, through shifts in R&D strategy and other tactics, the healthcare demands of the future.

The pharma industry in 2017 continued to face challenges. Although the global economy was in an upswing, the decision by the United Kingdom to leave the European Union (Brexit) caused political and economic uncertainty. Additionally, uncertainty persisted over the election of Donald Trump. However, even against this uncertainty, demand for pharmaceutical and healthcare services continued to grow, and is expected to grow throughout 2018 and beyond.

In 2014, the pharmaceutical industry accounted for 3.8 percent of the gross value added in manufacturing worldwide. Gross value added is the value of the products manufactured by a company less the value of its purchased materials and services, reflecting the additional value generated by the production process. The economic strength of the sector globally is roughly equivalent to the GDP of Argentina, which is $452.8 billion.

According to the IQVIA Institute for Human Data Science’s report, “Medicine Use and Spending in the U.S.: A Review of 2017 and Outlook to 2022,” U.S. spending on medicines grew by 0.6 percent in 2017 after off-invoice discounts and rebates. This spending includes all types of medicines, including institutional use for inpatients and outpatients. When adjusted for manufacturer discounts and rebates, as well as economic and population growth, medicine spending actually declined, on a per capita basis, by 2.2 percent in 2017. “The balance of medicine spending has shifted strongly to specialty medicines from traditional treatments,” IQVIA experts say.

IQVIA says the next five years, from 2018 to 2022, will see patent expiration impact that is 37 percent larger than the prior five years, including both small molecules and biologics. The peak year of impact is expected to be 2020 when spending on brands that no longer have exclusivity will be reduced by more than $30 billion across the 10 developed markets.

New medicines growth is projected to be slower in 2018-2022 than the period from 2013-2017, but growth from new medicines is expected to still be above the 2008–2012 average. In prior years, new drugs accounted for 2 percent to 3 percent of brand spending, with notable exceptions for more than nearly 7 percent in 2015 when new hepatitis C drugs were widely used.

From 2018-2022, new medicines growth is forecast to drive 2.5 percent to 3.5 percent of brand spending in developed markets.

According to IQVIA experts, new drug launches rebounded in 2017, with 42 new active substances introduced – more than double the number launched the prior year – with 21 for rare diseases and 14 in cancer.

“Significant shifts in the regulatory process are becoming apparent, with 19 drugs having received breakthrough designation and 18 including patient-reported outcomes as part of their approved label from FDA,” IQVIA says.

The U.S. outlook to 2022 is for 2 percent to 5 percent net spending growth, with 1 percent to 4 percent growth in retail and mail-order prescription drugs. This projected growth, driven primarily by the large number of new medicines – many of which will be specialty and orphan drugs – will be offset by the impact of losses of brand exclusivity, IQVIA experts say.

The advance of biosimilars

IQVIA notes that biosimilars have begun to have an impact on usage and costs in the therapies where they are available. Some of the top companies featured in this report are already anticipating the impact from biosimilars and have begun to launch their own biosimilars into the U.S. and EU markets.

For example, in July 2018 Pfizer received European Commission clearance for Trazimera, a biosimilar of trastuzumab, the active molecule in Roche/Genentech’s Herceptin. The EC decision marks the approval of Pfizer’s first therapeutic oncology biosimilar.

One product that will not be challenged by biosimilars in the United States any time soon is Humira (adalimumab), the leading biologic in the world. According to AbbVie executives, during the past year the company worked out arrangements with potential biosimilar competitors that should allow the product to maintain U.S. market exclusivity through early 2023. The drug generated 2017 sales of $18.43 billion for the biopharma company.

In July, AbbVie announced patent license agreements with Mylan over the proposed biosimilar adalimumab product. Under the terms of the agreements, AbbVie will grant Mylan a non-exclusive license on specified dates to AbbVie’s intellectual property relating to Humira in the United States and in various other countries in which AbbVie has intellectual property, excluding Europe.

The leading pharmaceutical companies in this report are having to shape themselves to the new realities of global healthcare. “Global health is poised to meet a series of key turning points, and changes seen in 2018 will mark the key inflections that drive the outlook for the next five years and beyond,” according to IQVIA. “The types of medicines being developed, the way technology contributes to health and how the value of healthcare is calculated are all changing, markedly.”

To meet these future healthcare challenges, several of the companies profiled in this annual report announced in 2018 that they were taking new directions with their R&D programs, acknowledging that their clinical studies had to take into account real-world evidence.

One of the companies shifting R&D strategy is GlaxoSmithKline. During July, GlaxoSmithKline revealed  a new approach by the company to R&D that concentrates on science related to the immune system, the use of genetics, and investments in advanced technologies.

According to management, the understanding of the science related to the immune system in the development of human disease is rapidly advancing, suggesting a much broader clinical and commercial opportunity for novel immune modulatory therapies. Additionally, access to large databases derived from carefully genotyped and phenotyped patient populations, combined with technological advances in data analytics, now offer the opportunity to direct drug discovery and development to a new generation of targets with significantly increased probability of success.

Company executives say GSK’s research will have an even greater focus on the basic biology of the immune system as well as targets that have a high degree of validation based on human genetics. “Medicines targeting mechanisms of action with strong human genetic validation have a higher (2-fold) probability of success. This means a shift to a genetics-driven (vs genetics-supported) portfolio.”

According to GSK leaders, investing in advanced technology platforms such as machine learning to support interpretation of genetics data will be a significant part of enabling the new R&D approach. Also, the Group will be investing in functional genomics to validate potential targets, applying techniques for gene modification including CRISPR technology. The company will invest in computational design, automation and new capabilities to assess the indication potential, selection, sequencing and management of evidence generation for new assets over the lifecycle. These investments will supplement GSK’s existing strengths in other technologies, such as a leading position in cell and gene therapy, company managers say.

Novo Nordisk announced plans to restructure the company’s R&D organization to accelerate the expansion and diversification of its pipeline across serious chronic diseases. According to executives, about 400 employees will be laid off from R&D roles in Denmark and China, in order to “enable increased investment in transformational biological and technological innovation within both core and new therapy areas.”

Novo Nordisk additionally will establish four Transformational Research Units in 2018 to pursue novel treatment modalities and platform technologies. The biotech-like units, based in Denmark, the United States and the United Kingdom, will operate as satellites of Novo Nordisk’s central R&D function and will drive innovation in priority fields such as translational cardio-metabolic research and stem cell research.

Furthermore, Novo Nordisk will significantly increase the company’s investment in automation and digital capabilities including machine learning and artificial intelligence, to drive a faster and more efficient path towards lead molecule selection and development. According to executives, the integration of laboratory infrastructure and IT systems will be prioritized to increase the efficiency of the R&D organization.

“Delivering on our ambition of achieving even higher levels of innovation across a broader and more diverse range of chronic diseases requires that we have the optimal future skill base and allocate resources to our priority areas,” says Mads Krogsgaard Thomsen, chief science officer, Novo Nordisk. “Unfortunately, this implies that a number of valued colleagues will lose their jobs in order to ensure that we have sufficient new research capabilities needed to support our long-term growth ambitions.”

The restructuring and re-allocation of resources supports Novo Nordisk’s ambition to transform the way the company works within R&D in order to identify and develop truly innovative drug candidates.

Executives say this will be done by identifying and pursuing new therapeutic approaches based on external collaborations – a priority that Novo Nordisk will accelerate via the establishment of a new Business Development unit in Cambridge, Mass.

Company of the Year Johnson & Johnson announced at the beginning of 2018 that the once-monthly schizophrenia treatment Invega Sustenna (paliperidone palmitate) became the first antipsychotic to receive FDA approval for inclusion of real-world data in the drug’s product labeling.

The data come from the Paliperidone Palmitate Research In Demonstrating Effectiveness (PRIDE) study. Invega Sustenna is the first antipsychotic to show superior effectiveness in delaying time to relapse versus a group of seven commonly prescribed oral antipsychotics in adults with schizophrenia who face common real-world circumstances. Invega Sustenna was initially approved by FDA in July 2009 as the first once-monthly, atypical, long-acting injection to treat schizophrenia.

During January, Eli Lilly and Livongo Health, a consumer digital health company focused on empowering all people with chronic conditions to live better and healthier lives, announced a strategic collaboration to study real-world evidence and develop new insights to reduce the burden on people living with diabetes. The research collaboration combines real-world behavioral studies and claims data to advance knowledge about effective interventions in diabetes care. The companies aim to contribute to medical literature in three areas: measuring the impact of remote diabetes self-management education and support on clinical and healthcare cost outcomes; understanding drivers of healthy behaviors; and understanding how people living with diabetes can stay more actively involved in their health. Livongo and Lilly aim to publish the results of their research studies to further advance diabetes care for people worldwide.

In the March 2018 report titled “2018 and Beyond: Outlook and Turning Points,” IQVIA says this year there will be between five and eight next-generation biotherapeutics approved and launched. Over the next five years, 20 percent of the 40 to 45 new active substances (NAS) projected to be launched each year are expected to come from this group of drugs. The pipeline of 142 next-generation drugs in late-stage research represents just 5 percent of ongoing late-stage research, but is anticipated to be more successful than other areas and will reach the market in large numbers.

The AstraZeneca product pipeline continues to deliver innovation. “During 2017, we made 18 NME or life-cycle management regulatory submissions in major markets and approved nine Phase III investment decisions,” says Pascal Soriot, CEO of AstraZeneca. These will provide plenty of news in 2018 as we await regulatory decisions and data read outs from clinical trials. Looking further ahead, we approved 14 NME Phase II starts or progressions in 2017 which will shape our future in the years to come.”

In 2017, the company had five significant launches from each of the company’s three main therapy areas. One of those drug launches was Imfinzi (durvalumab), which received U.S. accelerated approval in May 2017 for treating advanced bladder cancer. The drug was AstraZeneca’s first immuno-oncology (IO) approval and the cornerstone of the IO program, in development across many tumor types, as monotherapy and with other medicines.

FDA granted accelerated approval during October 2017 for Calquence (acalabrutinib) as a treatment for relapsed or refractory mantle cell lymphoma. This represented another landmark as the company’s first approval in blood cancer, received less than five months after regulatory submission. With a development program including more than 35 studies in multiple blood cancers, AstraZeneca believes the promise of Calquence is significant.

First-in-class drug approvals have continued for AstraZeneca in 2018. For example, is September U.S. regulators approved Lumoxiti (moxetumomab pasudotox-tdfk) for certain patients with relapsed or refractory hairy cell leukemia. This marks the first new treatment option for patients in more than 20 years.