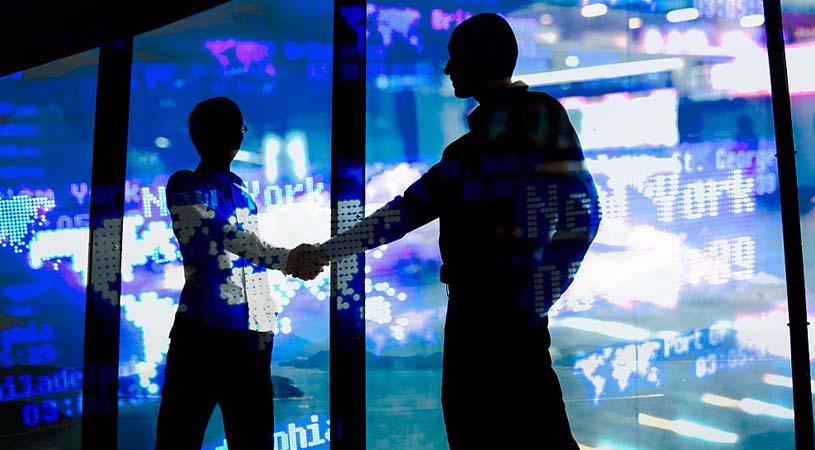 This year was not a banner year for mergers and acquisitions in the biopharma industry, at least not compared to 2014 and 2015. With the end of the year only a day away, analysts are looking at their crystal balls in anticipation of next year. Jacob Bell, writing for BioPharmaDIVE, looks at seven potential acquisition targets for 2017.

Headquartered in Philadelphia, Spark Therapeutics (ONCE) focuses on gene therapy for serious genetic diseases, including inherited retinal diseases, liver-associated diseases like hemophilia, and neurodegenerative diseases. On August 10, it announced positive new data from its Phase III trial of voretigene neparvovec to treat inherited retinal disease (IRD) caused by mutations in the RPE65 gene. It was granted breakthrough therapy and orphan product designations from both the U.S. Food and Drug Administration (FDA) and the European Medicines Agency.

Bell says, “Spark is attractive for the diverse set of candidates it’s investigating as well as the growth it has experienced as of late.”

Spark stock is currently trading for $50.74.

Based in Waltham, Mass., acquisition rumors aren’t new for Tesaro (TSRO). In July, the stock took a big jump from $37.21 on June 28 to $81.19 on July 1 when its Phase III trial of niraparib met its endpoints of progression-free survival (PFS) in patients with ovarian cancer. PARP inhibitors are a possible new class of oncology drugs, and Tesaro is leading the way. Companies that analysts speculate would be interested in Tesaro include Gilead (GILD), Amgen (AMGN), Celgene (CELG) and Pfizer (PFE).

Headquartered in Hamilton, Bermuda, Axovant Sciences (AXON) is focusing on Alzheimer’s drug, RVT-101. The company as founded by 30-year-old Vivek Ramaswamy, a former hedge-fund manager, who also founded Roivant Sciences in May of 2014.

Bell writes, “Results of a Phase III trial for its lead candidate will come sometime in 2017. That’s important, given the lack of treatments for mid- to moderate Alzheimer’s disease. As such, ‘the asset would be attractive to a broad group of companies if the data’s positive,’ said JMP Securities analyst Jason Butler.”

Axovant stock is currently trading for $12.59.

Analysts and investors want Biogen (BIIB) to either buy somebody or get bought. Some of this is related to the company’s overall dominance in the multiple sclerosis (MS) field, with generic competition and general competition expected in the near future. There were also reports this summer, right around the time the company’s chief executive officer, George Scangos, indicated he was retiring, that both Allergan (AGN) and Merck (MRK) had discussed a buyout. Both companies denied it. Biogen would be pricey, with a market cap of slightly over $60 billion.

Karen Anderson, an analyst with Morningstar, told Bell that an acquisition of Biogen “would be a straightforward way for a big pharma to add exposure to this area, which we think should see higher productivity in coming years due to better understanding of diseases like Alzheimer’s, Parkinson’s, and new ways of treating pain and rare genetic disorders.”

Based in San Rafael, Calif., BioMarin (BMRN) has had its ups-and-downs this year. In early January, the FDA turned down its application for Kyndrisa (drisapersen) to treat Duchenne Muscular Dystrophy (DMD). In October, the company hinted it might take another swing at DMD, but this was largely met by a lack of enthusiasm by investors.

The company’s market cap is below $16 billion, has a strong presence in the rare disease market, and despite its failures with DMD, it has Vimizim for Morquio A Syndrome (MPS IVA), Kuvan for PKU, Nagalzyme for MPS VI, Aldurazyme for MPS I, and Firdapse for LEMS. It also has pipeline products for achondroplasia, CLN2 disease, Hemophilia A and San Filippo Syndrome.

BioMarin stock is currently trading for $82.75.

Vanda Pharmaceuticals (VNDA) is headquartered in Washington, DC with locations in the UK and Germany. There were rumors back in 2009 that Novartis (NVS) might buy the company, and in September of this year a Reuters report suggested Vanda was evaluating a sale as part of a strategic evaluation.

The company has Metlioz (tasimelteon) and Fanapt (iloperidone) on the market. Hetlioz is prescribed to treat non-24-hour Sleep-Wake Disorder. Fanapt is approved to treat schizophrenia in adults.

Jason Butler, an analyst with JMP Securities, told Bell the company’s market cap is $746 million and is bringing in revenue. “From that perspective, the company has two assets which have longevity, which have growth potential in arguably attractive commercial markets, so they’re going to garner attention from an M&A perspective.”

Vanda stock is currently trading for $16.08.

This isn’t exactly a revelation. It was reported at the end of November that Johnson & Johnson (JNJ) was in talks to buy the Swiss-based Actelion Pharmaceuticals (ALIOF.PK), but walked away from the deal. Then it was reported that Paris-based Sanofi (SNY) was in talks to acquire the company. Then, on December 22, both Actelion and J&J announced that they were in talks about a possible “strategic transaction.” Chances are, somebody’s going to buy Actelion.

Actelion focuses on rare drugs, and recently brought two new drugs on the market, both of which have the potential to become blockbusters over the next two or three years. The two new drugs are Opsumit and Uptravi, both to treat pulmonary arterial hypertension (PAH). About half the company’s revenue comes from sales of Tracleer, also used to treat PAH, but will face generic competition at the beginning of 2017.