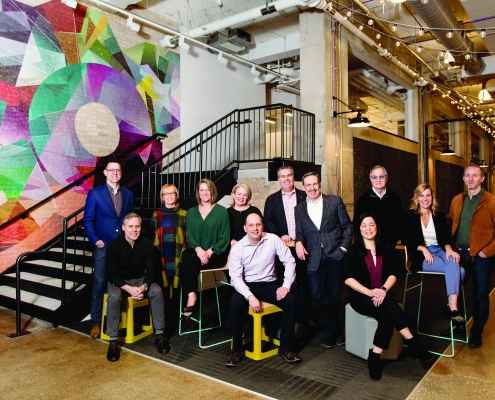 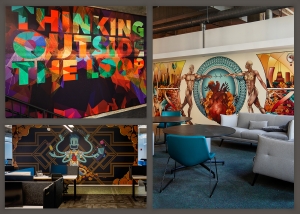 WINNER – BEST SELF PROMOTIONAL CAMPAIGN: Prior to its office relocation, AbelsonTaylor employees had the opportunity to enter an art contest, where three lucky winners would have their murals displayed on the agency’s walls. The criteria for the work was based on those that had strong geometry, art-deco influenced design, and combining those aesthetics with compositions that focused on merging creativity and science/medicine. Agency leaders also wanted to mix and match various artwork throughout the space in keeping with the creative wall art vibe they were looking for. 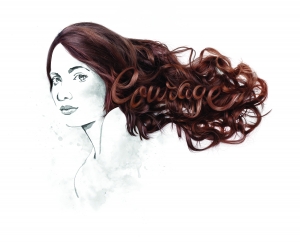 FINALIST – HEART AWARD: AbelsonTaylor’s commitment to philanthropy continues to be fundamental to the agency’s business model. The agency’s Hearts AT Work initiative offers employees more than 50 different opportunities to give back to the community. One of the highlights of 2019 was AT’s work on Wig and a Prayer, a new charity founded by one of the agency’s cancer survivors that supports women during cancer treatments, particularly with financial support in getting wigs. AT furthered a long-standing pro bono relationship with Heifer International by partnering in the Future of Food project in Ecuador, which aims to improve the nutrition and close the income gap of 4,211 families involved in agroecological production and commercialization in six provinces of the highlands and Galapagos by the end of 2025. 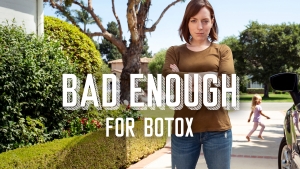 Finalist – Best Consumer TV/Radio Campaign: AbelsonTaylor channeled its “Bad Enough” message as a broadcast TV spot depicting gritty vignettes of badass women – a mom, chef, a teacher – living their badass lives with fewer headaches and migraines. The campaign empowered and educated all at the same time, while setting the tone and theme for a full spectrum of new Botox integrated material. 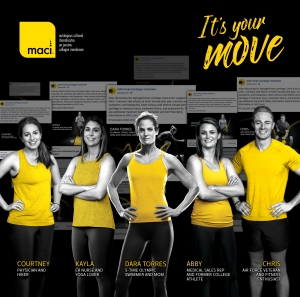 Finalist – Best Patient Engagement Campaign: The “It’s Your Move” campaign was evolved to include real MACI patients as co-faces of the brand. Together with Olympian Dara Torres, AbelsonTaylor’s MACI weekend warriors forged a formidable marketing force to show the breadth of recovery possible with MACI.

Agency management says to help grow and nurture the spirit of positive change, AbelsonTaylor moved to a fantastic new space in Chicago’s famous Old Post Office. “It dramatically changes the way we interact and collaborate,” AT executives say. “The new space is designed with a “maker” esthetic intended to do two things 1) take down the walls that divide us, not to just foster better collaboration, but to give added visibility, access, and inspiration to the work that’s taking place across the entire agency and 2) create flexibility by giving the staff a number of different workspace options (workstation, team rooms, quiet rooms, etc.) so they can decide on any given day, week, or month the type of space they desire for the type of work they need to accomplish.”

In 2019 AbelsonTaylor added an additional eight brands to its roster, half without a pitch. These wins included therapy for the treatment of a CD19-directed genetically modified autologous T-cell immunotherapy for the treatment of large B-cell lymphomas, therapy for chronic idiopathic constipation, a game-changing enzymatic thermal wound debridement product, a breakthrough treatment for hypertrophic cardiomyopathy, a prescription parathyroid hormone to control low blood calcium, intravenous iron indicated for the treatment of iron deficiency anemia, and a glucagon-like peptide-1 (GLP-1) receptor agonist implant for type 2 diabetes. The agency began working on a compound currently being studied in psoriasis, atopic dermatitis, seborrheic dermatitis, and scalp psoriasis.

“Last year we had the opportunity to launch campaigns that achieve results, both for our clients and the patients they serve,” agency leaders say. “We launched new campaigns for the topical treatment of plaque psoriasis, a parenteral P2Y12 platelet inhibitor indicated as an adjunct to percutaneous coronary intervention, an unbranded HCP campaign that addresses the issue of wet aged-related macular degeneration, and an HCP-focused, nonpersonal content campaign in rheumatology, and launched five innovative stories in 2019. We also launched the award-winning multichannel disease education campaign, B In The Know, for CSL Behring’s Idelvion, a new branded campaign for the launch of Jornay PM for the treatment of ADHD, and the Endosee Advance System, an all-in-one, direct visualization system for diagnostic and therapeutic procedures. In addition, we launched a new broadcast TV spot and digital campaigns for Botox for chronic migraines as well as an updated website and all digital assets to complement the TV spot.” 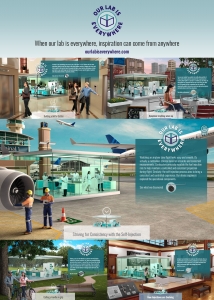 Fnalist – Best Experiential Campaign: OurLabIsEverywhere.com is the central hub for a first-of-its kind content marketing campaign that appeals to the innate curiosity of rheumatologists in order to deliver the Enbrel brand message. The site contains a growing variety of topically diverse, long-form articles, connected only by the mission of the site: to demonstrate that for Amgen, innovation is inspired by the everyday world beyond the walls of a lab.

According to AT executives, “Our creative success has continued to garner attention in the industry. With more than 45 major creative awards won, 26 of those were gold and 14 were silver. Two of our big winners were campaigns that launched in 2018 and continued to attract attention in 2019. Our work on these campaigns for COOLIEF and MACI have received nods for the craft and technique of both the broadcast and websites we created. Additionally, a new campaign that has won multiple awards is our work for Enbrel, ‘Our Lab Is Everywhere.’ This website demonstrates that content marketing based upon deep customer insights can, indeed, be effective in the branded pharma space. The campaign we created for Abbott Nutrition’s Ensure showed its incredible power by still running after nine years. In addition, the Medical Advertising Hall of Fame bestowed upon us yet another Heritage Award for our ‘In a Word Campaign’ on behalf of Teva Oncology. This award was in addition to our five previous Heritage Awards and two Digital Pioneers Awards.”

In 2019, the agency continued strategic partnerships with MIT Hacking Medicine and Matter, a Chicago Healthcare incubator. Early last year, the agency announced a new industry outreach program called Icons.Health, an online video series that captures unexpected, unscripted moments taking place at the intersection of healthcare and technology. “Capturing conversations from Austin to Boston to Cannes, executives from the world’s leading tech companies exchanged ideas with entrepreneurs from some of the scrappiest, most successful healthcare start-ups,” AT management says. “Their conversations have produced dozens and dozens of free-form conversational videos that present interesting dialogues about the topics most important to our industry today. With topics ranging from chatbots to healthcare incentives to digital therapeutics, Icons.Health is a fascinating resource for anyone with a healthcare focus in their life.” The online video series was recognized with a Manny Award.

While these wins were gratifying, agency leaders say, 2019 was also a year of positive change for AbelsonTaylor. Jeff Berg, a 17-year veteran of the agency and former executive VP and director of client services, assumed the role of president while Dale Taylor remained as CEO and chairman. Lynnette Hunter, formerly senior VP, account director, has assumed Berg’s previous role as executive VP, director of client services. Jeanine Koch, formerly senior VP, project management, was elevated to executive VP, project management. AT welcomed Christopher Dimmock, senior VP of integrated strategy services, who has restructured the account planning, engagement strategy, and media teams and strengthened the agency’s data and analytics team. Also new to AT is Beth Carik as VP of human resources, who implemented a new performance review system that provides faster and better feedback to employees and managers, increased internal communications, and initiated a new work from home policy as well as summer hours.

As part of the agency build-out in its new space, AbelsonTaylor’s in-house motion and still design studio, DOSE, has created two private edit suites. DOSE also boasts an on-site shooting studio that works for both still and motion video capture. “The new DOSE studio space is designed to shrink the production triangle of time, budget, and quality to the point where AbelsonTaylor can offer clients nimble flexibility for projects without sacrificing the creativity,” executives say. 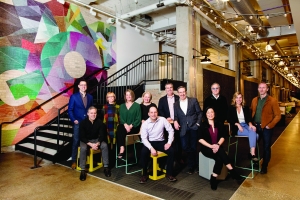 AT leaders say, “With all the new business, new location, and new initiatives already in place, 2020 looks to be a year of opportunity and growth for AbelsonTaylor.”

For the past 12 years, AbelsonTaylor’s Hearts AT Work has been a source of pride for the agency, management says. Every employee can participate in more than 50 different opportunities in programs that range from internal events, external events, and AT employee-led causes to pro bono work.

Highlights during 2019 included the agency’s work to help one of its own cancer survivors launch a new charity: Wig and a Prayer. The mission of Wig and a Prayer is to support women during cancer treatments, particularly through financial support in getting wigs. “This was very personal to many of our employees,” executives say. “They were happy to ideate a great concept and then raise their hand (again) to invest an evening of their time to HACK the materials that were needed to launch this important initiative.”

For the third year in row, AbelsonTaylor partnered with Christmas Without Cancer, which identifies need and then provides gifts and basic necessities to Chicagoland families with members stricken with cancer to allow the beauty of the holiday season to shine through while family members find comfort in their devotion to one another.

AbelsonTaylor furthered a long-standing pro bono relationship with Heifer International by partnering in the Future of Food project in Ecuador, which began during 2019 to improve the nutrition and close the income gap of 4,211 families involved in agroecological production and commercialization in 6 provinces of the highlands and Galapagos by the end of 2025. This will benefit 1,000 additional families through their participation in the Comprehensive Community Training Program in Agroecology. This project responds to a current demand for healthy, environmentally and socially friendly food.