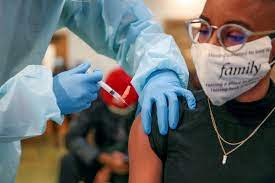 About 14 million in U.S. get first COVID-19 shot in August, up from July

By Carl O’donnell and Lisa Lambert
(Reuters) – Around 14 million people in the United States received their first dose of a COVID-19 vaccine in August, about 4 million more than in July, officials said on Tuesday as the government pushes inoculation as infections rise.

The United States’ vaccination rate still lags other developed countries. Only around 52% of U.S. residents are fully vaccinated, including about 63% of adults, according to federal data.

Meanwhile, the European Commission said on Tuesday that 70% of the European Union’s adult population had been fully vaccinated against COVID-19. read more

U.S. President Joe Biden has urged businesses to mandate vaccinations for their staff in a bid to drive up vaccination rates. read more

The White House also plans to begin vaccinating Americans with a third booster shot in September, but an advisory group to the U.S. Centers for Disease Control and Prevention said on Monday there is limited evidence to support boosters.

The advisory group “did not review international data that actually has led us to be more concerned about increased risk of vaccine effectiveness waning against hospitalization, severe disease and death,” CDC director Rochelle Walensky said on a call with journalists.

Average daily coronavirus infections in the United States are around 130,000, up from lows of fewer than 12,000 in late June, mainly due to the Delta variant of the virus.

Deaths have also been rising. The seven-day average of daily deaths is up to nearly 900, higher than in the previous week, Walensky said.