The big are getting bigger: Aetna and Humana, the nation’s number three and number four health insurers by revenue, are merging.

Aetna will pay about $230 per share for Humana, in a $37 billion cash and stock deal, the largest-ever deal in the health insurance industry.

It’s also the latest major merger in an increasingly frantic health care marketplace. On Thursday, Centene announced that it was buying HealthNet for nearly $7 billion, and CVS last week bought the Target pharmacy business for $2 billion.

Aetna and Humana still need federal approval. But the combined company could become the nation’s number two health insurer, behind UnitedHealth Group … which had recently approached Aetna with its own offer to merge.

(And the other two big health insurers, Anthem and Cigna, have also talked about merging.)

As health reporter Christopher Weaver cleverly framed it a few weeks ago, health insurers are playing a “Game of Thrones.”

But what crown are they after? And why are they merging now?

One common argument is that the Affordable Care Act is hurting health insurers, and pushing them to merge — but there’s limited evidence that the biggest players are struggling. While the ACA capped insurers’ ability to take profits, industry analysts have been fairly bullish on the sector.

“U.S. health insurers have successfully managed challenges from the rollout of the Affordable Care Act,” Moody’s declared in February, raising its outlook on insurers from “negative” to “stable.”

And as I wrote earlier this week, the ACA appears to have only helped major insurers, by driving millions of new customers into the market. Aetna and Humana have seen their stock valuations triple in the past five years, since the ACA was signed into law, and the other three major insurers also have seen huge gains. 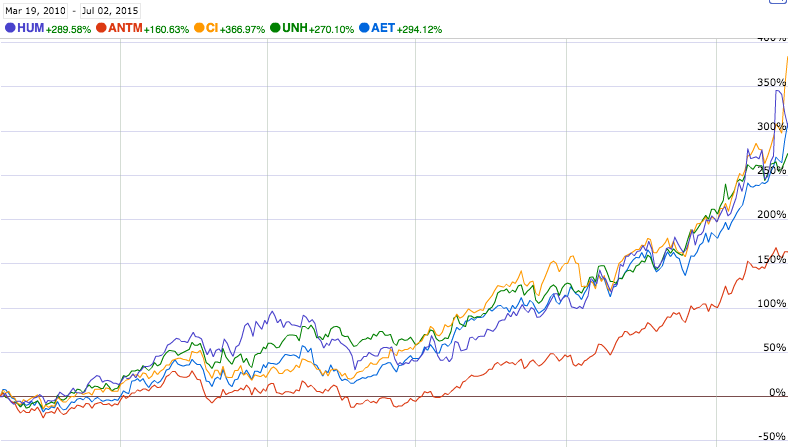 Another proffered explanation is that deals like Aetna-Humana are about gaining greater efficiency.

“The complementary nature of our two companies provides us with a significant synergy opportunity, furthering Aetna’s efforts to increase its operating efficiency,” said Shawn M. Guertin, Aetna’s executive vice president and CFO, in a statement. “These cost efficiencies will support our efforts to drive costs out of the system and offer more affordable products.”

“Insurers are eager to reduce expenses and build scale that will help them face off against health-care providers that are bulking up,” the Wall Street Journal reported on Friday.

But Aetna and Humana already are giant, scaled entities. And economists aren’t buying the claim that insurer consolidation will lead to lower costs.

“These are already bigger companies,” says Martin Gaynor, a Carnegie Mellon economist and former FTC official. (We spoke last week, before the Aetna-Humana deal was consummated.) “It’s not clear to me, do they get any more scale economies from getting bigger?”

Consolidation among giant insurers “reminds me of the airline sector, and I don’t think there have been efficiencies gained there — and they have a more direct way of finding efficiencies, with the hub-and-spoke model,” Robert Town, a health care professor at the Wharton School, told me last week.

“Here, it’s a little less clear where they get those efficiencies,” Town added. “The economies of scale in insurance are relatively modest.”

In a post for the Columbia Journalism Review, industry watchdog Trudy Lieberman cited studies that larger insurers may end up hiking their prices, not lowering them. And as Bruce Japsen has written for FORBES, hospitals and doctors are worried that super-sized insurers could squeeze reimbursement and engage in anti-competitive behavior.

Perhaps the best rationale for health insurers’ deals is that it allows for greater diversification. For instance, Humana already serves about one-fifth of the nation’s 16 million Medicare Advantage patients, and that pool is expected to grow.

“Medicare Advantage is a coveted space,” Michael Bernstein, a partner at Baird Capital’s U.S. private equity team who focuses on health care, told Bloomberg in an interview last month. “To develop a similar scale in Medicare [for Aetna] would take a great deal of work and time, which would be bypassed by making that transaction happen.”

But economists see one more explanation: Amid health care’s merger mania, insurers are feeling psychological pressure to make deals of their own.

“I think they don’t know what else to do,” Town mused. “They’re not bending the cost curve.”

“Providers are saying, they might need to get bigger too,” adds Gaynor. So for insurers, seeking out deals “is insurance against unforeseen evidence … even though sometimes smaller is nimbler, it’s a better position.”

“In health care, bigger is not always better.”