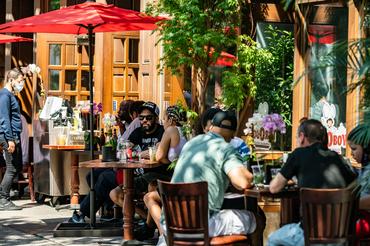 NEW YORK (Reuters) – After more than 100 days of lockdown, New York City residents on Monday celebrated their progress in curbing the coronavirus pandemic by getting their first haircuts in months, shopping at long-closed stores, and dining at outdoor cafes.

Once the epicenter of the global outbreak, the city was the last region in New York state to move into Phase 2 of reopening with restaurants and bars offering outdoor service and many shops reopening. Barber shops and hair salons welcomed customers for the first time since mid-March.

Playgrounds were also due to reopen on Monday in the most populous U.S. city. The pandemic has killed nearly 120,000 Americans and is flaring up in a dozen states that reported record increases in cases last week.

Customers wearing face coverings lined up outside Clementine Bakery in the Brooklyn neighborhood of Bedford-Stuyvesant on Monday, and a few enjoyed the warm summer morning sipping iced coffee at scattered tables on the sidewalk.

“It feels like my life is starting to get back to normal a little bit. It feels really nice the fact that I can sit and have a coffee,” said Arden Katine, 34, a teacher who lives in the neighborhood.

Neighboring New Jersey allowed sports like golf and tennis to resume practice and competitions on Monday, and permitted sports considered higher risk, such as baseball and football, to start no-contact practices and drills.

New Jersey also gave the green light for nail salons, barbers and other personal care businesses to reopen on Monday, albeit with restrictions.

Young competitive swimmers, locked out of any pool since the onset of the pandemic, got back into the water on Monday morning at the Dolphin Swim and Athletic Club in Vineland, New Jersey, which reopened for practice at 6:30 a.m.

Lanes are limited to five swimmers, who each have spots marked off in the pool to help maintain distance. Umbrellas have been set 6 feet (1.8 meters) apart, hand sanitizing stations have been installed, and diving boards and slides have been closed.

“There is tape all over the ground,” said Jennifer Masucci, a board member at the club. “It looks different but everyone is adjusting because they want to be out.”

While new cases in New York and New Jersey are at record lows with 1%-2% of tests coming back positive, a dozen states in the South and Southwest United States reported record increases in new coronavirus cases. In some, more than 10% of people tested positive. The same states often reported record hospitalizations, a metric not affected by more testing.

The number of new cases rose by a record last week in Arizona, California, Florida and Texas, together home to about a third of the U.S. population. Alabama, Georgia, Nevada, Oklahoma, Oregon, South Carolina, Utah and Wyoming also experienced record spikes in cases.

Seeking a second White House term in a Nov. 3 election, President Donald Trump travels to Arizona on Tuesday for a Phoenix youth gathering. Trump held his first political rally in months on Saturday at a partly empty arena in Tulsa, Oklahoma.

Health experts have warned people to avoid large gatherings and wear masks but few took that advice in Tulsa. 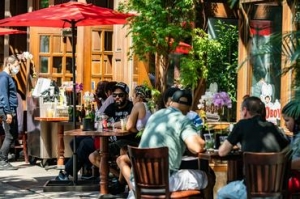 People eat in outdoor seating outside a restaurant before the city starts phase two of reopening after the lockdown due to the coronavirus disease (COVID-19), in the Manhattan borough of New York City, U.S., June 21, 2020. REUTERS/Jeenah Moon

Trump defended his response to COVID-19, saying more testing had led to identifying more cases, seemingly to his chagrin.

“When you do testing to that extent, you’re going to … find more cases,” he said. “So, I said to my people, ‘Slow the testing down, please.’” A White House official said he was “obviously kidding” with that remark.