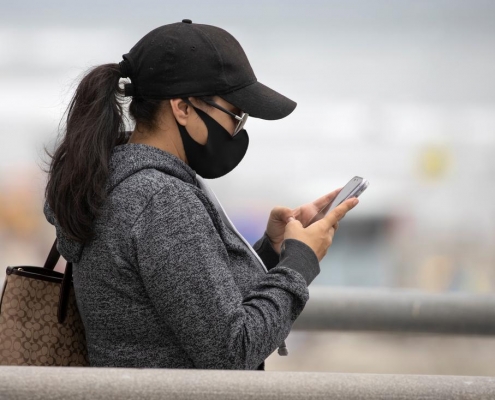 NEW YORK (Reuters) – Americans’ anxieties over the spread of the coronavirus are at the highest in more than a month, a Reuters/Ipsos poll showed on Wednesday, as California recorded its biggest single-day spike in cases since the pandemic began.

With the U.S. death toll at more than 127,000, by far the highest in the world, the June 29-30 poll found that 81% of American adults said they are “very” or “somewhat” concerned about the pandemic, the most since a similar poll conducted May 11-12.

The epicenter of the U.S. pandemic has moved from the northeast to the west and south, especially California, Texas, Florida and Arizona.

Bill de Blasio, the mayor of hard-hit New York City, said on Wednesday he was not going ahead with a plan to allow indoor restaurant dining from July 6, citing the alarming situation elsewhere.

“We see a lot of problems and we particularly see problems revolving around people going back to bars and restaurants indoors, and indoors is the problem more and more,” de Blasio said at his daily briefing.

Public health officials believe the decision to reopen bars in many states was one of the main contributors to the sharp increases. Several states have since moved to re-close them.

Cases in California rose by 8,441 on Tuesday as the United States recorded it biggest one-day increase of nearly 48,000 new infections, a Reuters tally showed.

Concerns about the pandemic appear to be rising the most among members of President Donald Trump’s Republican Party, according to the Reuters/Ipsos poll.

Republicans have generally been less enthusiastic about imposing and maintaining restrictions to stop the spread of the virus such as sheltering at home or wearing face masks, turning the public safety measures into a partisan issue.

In the Nov. 3 presidential election, Trump will face Joe Biden, the presumptive Democratic nominee, who on Tuesday ratcheted up his attack on Trump’s handling of the crisis.

COVID-19 cases more than doubled in June in at least 10 states, including Republican-led Texas and Florida, a Reuters tally showed. 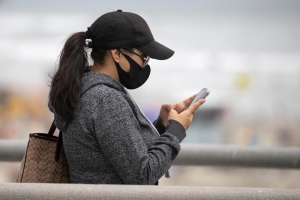 FILE PHOTO: A women wears a face masks as she views her mobile phone during the global outbreak of the coronavirus disease (COVID-19) in Oceanside, California, U.S., June 22, 2020. REUTERS/Mike Blake

Trump officials have blamed the surge in cases on increased testing, but the rise in the percentage of people testing positive and in hospitalizations are not linked to more tests being conducted.

Three states with at least 500 total deaths – Arizona, Louisiana and Texas – have seen the rate of fatalities increase for two weeks or more. Deaths in Arizona rose 63% in the week ended June 28, one of the largest increases in the country.

In parts of Texas and Arizona, hospital intensive care beds for COVID-19 patients are also in short supply.

With limited guidance from the White House, the pandemic fight has largely been left to local officials, and the pressure to re-open their economies has been enormous. Millions have lost their jobs as the economy contracted sharply in the first quarter and is expected to crater in the second.

Just weeks ago, it was the other way around. In a June 8-9 poll, 26% said they wanted a candidate who was strong on the economy and 21% said they were looking for someone who could handle the coronavirus.