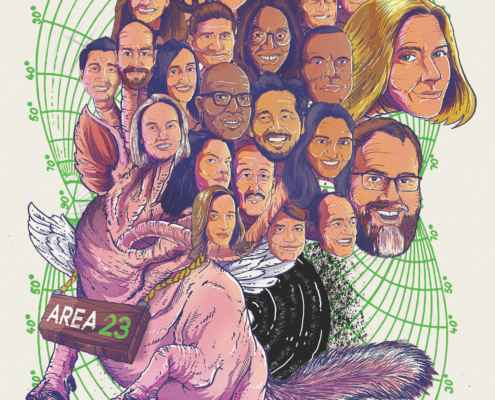 ‘The Stranger It Gets, The Stronger We Get” – agency leaders say these words became AREA 23’s rallying cry. “In response to once-in-a-century circumstances, AREA 23’s people united to create an environment of empathy and caring, and delivered business results that were nothing short of shocking in the process,” agency executives say.

In any other year, AREA 23’s financial growth would be the headline accomplishment, but in 2020, agency leadership is most proud of its cultural growth. According to Chief Creative Officer Tim Hawkey, “We had to pull together last year. Our people went through hell. Getting sick, losing family, mastering remote learning, battling mental health issues … On top of that, the racial divides have made us acutely aware of the systemic racism our Black colleagues face every day. So our primary focus really became focusing on each other. And the people of AREA 23 responded by bringing humanity, kindness, and generosity to work with them every day, coming together to support each other no matter what. It’s been humbling.”

President Renée Mellas adds, “We’ve always prided ourselves on our values of Boldness, Entrepreneurship, Passion, and Curiosity. We’ve added a new value to the list: Empathy.”

And while the transformation in culture has been inspiring, according to agency leaders, the business results have been nothing short of preposterous. The agency grew by 30 percent – the equivalent of an entire Tier 3 agency, and staff count grew from 600 to 625.

“We pivoted with our clients quite early on,” Mellas says. “We were pushing virtual booths while our clients were still booking their travel for congresses. So while the types of projects changed across the board, I think our foresight helped preserve the number of projects we worked on, and our growth numbers surely reflect that.”

On the new business front, agency leadership continued their commitment to limit new business participation in order to focus on client business, but 2020 offered some exceptions. “We declined 33 RFPs last year, and we’re confident it was the right move,” Mellas says. “We did some pitches with existing clients, but remained very selective, making sure not to strain our staff.”

The results are hard to argue with: a whopping 18 new products on the agency roster, fueling AREA 23’s financial health. At the top of this list was the biggest win of the year – coming out of the Lilly consolidation pitch with a bolstered portfolio and significantly strengthened partnership. All told, the final win list includes Lebrikizumab, Erbitux, Tyvyt, Reyvow, and Loxo-305 from Lilly; Apraglutide from VectivBio; Alkindi Sprinkle from Eton; Spesolimab from Boehringer Ingelheim; Tapinarof from Dermavant; Finerenone from Bayer; eight different products from Kate Farms; and AstraZeneca’s COVID-19 vaccine, AZD1222.

Another benefit of limited pitch participation was the ability to focus on supporting the agency’s nine launches. “Launching Retevmo in RET+ NSCLC and advanced MTC for Lilly is one of our signature achievements this year,” Hawkey says. Other major launches in 2020 include ViiV’s Rukobia for HIV, Blenrep for relapsed/refractory multiple myeloma from GSK, Orgovyx for advanced prostate cancer from Myovant, Tepezza for thyroid eye disease from Horizon, Ongentys for Parkinson’s disease from Neurocrine, Nucala for severe eosinophilic asthma from GSK, Gemtesa for overactive bladder from Urovant, and Alle, a best-in-class loyalty program from Allergan.

While the pandemic brought the majority of productions in the advertising industry to a screeching halt, production at AREA 23 sailed along. According to Hawkey, “We had already begun focusing on animated film – work that can be executed in someone’s basement if need be. When lockdown hit, most of our projects were already some form of CGI, illustration, typography, or animation.”

“Max and Maxine,” a touching film for Lilly’s Cyramza; “Down and Out Kidney,” a disturbing animated tale for Horizon’s Krystexxa; “Town World,” the inspiring story of Rukobia drug discovery for ViiV; and a series of fantastical, animated vignettes depicting life with NTM lung disease for Insmed are just some of the leading projects that created disproportionate share of voice for their brands in 2020.

While the majority of awards shows hit the pause button this year, AREA 23 put in record performances at those that did hold competitions, agency executives say. “At the Manny Awards, AREA 23 entered dynasty territory, taking its third trifecta in four years, winning Category 1 Agency of the Year, Most Creative Agency, and Most Admired Agency (the fifth year in a row it’s taken this particular title). At the MM&M Awards, AREA 23 won Category 1 Agency of the Year, along with nine other trophies for their creative work. AREA 23 also took home nine One Show Pencils and two D&AD pencils, which are widely regarded in consumer advertising as the toughest to win. While 2020 provided a small break from the award circuit, these meaningful wins gave AREA 23’s people some nice moments ‘approximating normalcy.’”

“The last major business change AREA 23 took on in 2020 was to continue to seamlessly integrate patient services into its teams,” management says. “For many of its brands, this meant taking a holistic look at customer experience and embedding the appropriate expertise within teams – with the ability to bring in specialized support. The result? Several key clients moved work to AREA 23 after its success with project-based assignments.”

With long-standing issues like systemic racism now firmly in the spotlight, AREA 23 leaders say they are determined to take real steps to implement long-term improvements internally, and industry-wide, to create an anti-racist environment. Leading the charge will be the newly formed AREA 23 chapter of FCB WE, an FCB Health Network-wide internal organization focused solely on DE&I. According to Mellas, “Our WE chapter includes co-chairs from account management, editorial, and strategic planning, ensuring that diversity and inclusion initiatives are part of our daily life. The team has already made a huge impact on how we are prioritizing efforts in 2021, from manager training to diversity recruitment.”

If there is a lesson to be learned from 2020, it’s that community can overcome adversity, conquer fear, and beat uncertainty, agency leaders say.

What does this mean for 2021 and beyond? As Mellas sees it, “The world has changed significantly, and perhaps in some ways forever. We’re not looking for a return to normalcy and we believe we can do more than just survive this business environment – we can thrive.”

Hawkey adds, “Our culture has never been stronger, our people have never been closer, and there have never been more important problems we need to solve for our clients and the world. Last year changed us for the better. We are now a people-focused organization. Our incredible performance last year is all the convincing we need that this approach is here to stay.” 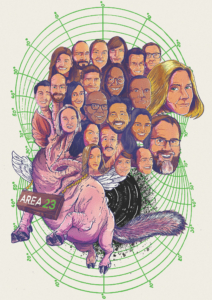 All the heads of AREA 23, including Renée Mellas and Tim Hawkey.

Philanthropy and corporate citizenship are core to AREA 23’s identity, and in 2020, this was more evident than ever, management says. “Inspired by the real challenges of the pandemic, the social and economic estrangement felt by many, and the heightened recognition of structural inequalities and systemic racism, AREA 23 looked to take on these challenges directly.”

Tackling the topic of pandemic-related social isolation among teens was the Social Distance Squad project. AREA 23 created, in partnership with five leading cystic fibrosis (CF) nonprofits, a special program led by kids, teens, and young adults with CF who have been social distancing their entire lives due to this genetic disorder. These young experts banded together to share lockdown tips, wisdom, and support through social media, learning institutions, and one-on-one settings with kids across the country who have been struggling with social distancing. Since early spring, the Social Distance Squad has partnered with teachers and made appearances via Zoom and other online platforms in virtual classrooms across the country, ultimately branching into creating lessons on Instagram, YouTube, and TikTok about ways of staying healthy and happy.

AREA 23 also took on what has been referred to as the “shadow pandemic” – the major spike in domestic violence driven by quarantine. “Enter Operation Safe House – a program that made use of the reduced demand for corporate housing to place victims of domestic violence in immediate need of refuge,” management says. “AREA 23 struck a deal with Blueground – a corporate housing corporation – to waive their rental fees for abused families in need of refuge. Operation Safe House has currently rescued eight individuals from life-threatening situations.”

AREA 23 leaders say they brought their clients into the philanthropy fold as well. Recognizing that pharma sales reps – and their iPads – were grounded, the agency partnered with Insmed to redirect those iPads to local ICUs. They were used to connect COVID patients with their loved ones – in many cases, to say goodbye.