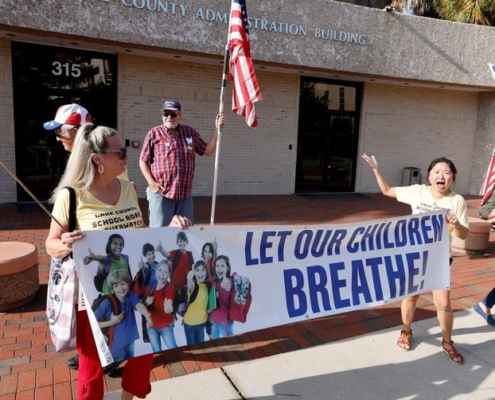 By Saundra Amrhein and James Oliphant

TAVARES, Fla., Sept 3 (Reuters) – In a scene replayed across the United States, angry parents and activists streamed into a meeting of the Florida’s Lake County school board on Thursday where it considered whether to mandate mask-wearing for students and staff due to COVID.

Some opponents of the mask proposal brandished signs that read “Let Our Children Breathe.” Even with Florida seeing a record number of coronavirus cases, one attendee called the pandemic “overblown.” Another was escorted out by deputies after yelling at board members.

The proposal would require staff and students to wear masks for 14 days at schools with COVID positivity rates at or above 5%. But Florida’s Republican governor, Ron DeSantis, effectively banned similar mandates in July.

Since DeSantis’ order, more than a dozen Florida counties have rebelled and voted to require masks to protect students and teachers as the Delta variant sweeps across the state. This week, the state’s Department of Education sanctioned two counties that passed school mask requirements.

The battle between DeSantis and the state’s school systems echoes larger fights across the country. Other Republican-run states such as Arizona and Texas have also banned mask mandates in schools even as COVID cases have soared in their states, as parents and voters are sharply divided over safety measures and personal freedoms.

The pushback in Florida against the Republican governor initially was led by large urban school districts run by Democrats. But this week saw more conservative counties that backed Republican Donald Trump in the 2020 presidential election also defying DeSantis and instituting their own mandates. 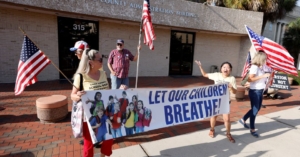 A day later, Hernando County, which supported Trump over Biden by almost 30 points, also passed a mandate, but one that allows parents to opt out.

In Lake County near Orlando, which also strongly backed Trump, a school official said on Thursday that more than 1,000 students of the 36,000 in the district had tested positive for the virus.

The board listened to more than three hours of public comment on the mask proposal then postponed a decision. Some 280 people spoke or sent emails on the issue, and two-thirds of them supported the idea, the Orlando Sentinel reported.

Still, proponents of a mask mandate were booed and heckled by the crowd in attendance.