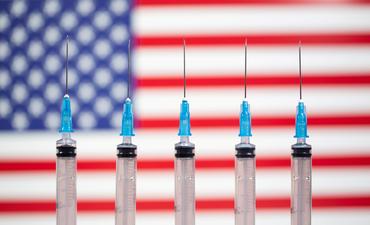 As U.S. companies push to get workers vaccinated, states disagree on who’s essential

NEW YORK/CHICAGO (Reuters) – Companies and industry groups lobbying to get their U.S. workers to the front of the line for COVID vaccination are running into a patchwork of state plans and confusion over who is essential, and who is not.

Inoculation against the disease caused by the novel coronavirus is key to safely reopening large parts of the economy and reducing the risks of illness at crowded meatpacking plants, factories and warehouses.

But before one needle has entered the arm of an American worker, confusion has broken out over who exactly is considered essential during a pandemic.

With initial vaccine doses limited and strong federal guidance lacking, it has fallen to U.S. states to determine who will be first in line to receive a vaccine, and who will have to wait well into next year.

State vaccine distribution plans reviewed by Reuters showed broad discrepancies over who would be considered essential, with some states clearly outlining specific worker groups and others not providing any clarity.

Generally, states have broad discretion when it comes to vaccine distribution and policy and are able to issue vaccination mandates for their residents.

Many states have so far followed federal guidance to give meat and food processing industry workers space in the line, but some are slowly moving away, said Mark Lauritsen, a former hog slaughter worker who now advocates on behalf of about 250,000 meatpacking and food processing workers under the United Food and Commercial Workers union.

“For example, Colorado has not moved meatpacking and meat-processing as high as some other states. So we’ll be directing a lot of our effort towards places like Colorado where we may be moved down the food chain.”

“We’re a union that has members in every state so we will be talking to every state to make our case as to where our place in line should be…Everybody is going to be jockeying for a place in line.”

DoorDash in its letter calling for preferred vaccine access for its delivery workers said the company could also help public health officials communicate vaccine information through its platform.

“We’re hopeful that local health officials start jumping on this quicker rather than later so that there’s some guidance and some better sense of how to be efficient with the essential workforce,” said Bryan Zumwalt, executive vice president of public affairs for the Consumer Brands Association. 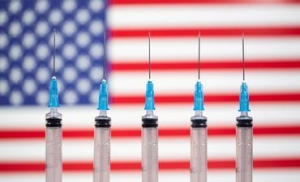 FILE PHOTO: Syringes are seen in front of a displayed U.S. flag in this illustration taken November 10, 2020. REUTERS/Dado Ruvic/Illustration/File Photo

The group representing consumer products makers including Procter & Gamble Co and Coca-Cola Co, has sent letters to nearly all 50 U.S. states and federal officials, urging their nearly 1.2 million workers to be prioritized for a vaccine.

ACIP to date has only recommended healthcare personnel and residents of long-term care facilities should receive the vaccine first – a priority not disputed by any industry or state. ACIP members did not respond to a request for comment or declined to comment pending the discussions.

U.S. President-elect Joe Biden has criticized President Donald Trump’s lack of a coordinated plan to distribute coronavirus vaccines, but it is not clear whether the federal government could overwrite state distribution plans.

In New York, essential frontline workers regularly interacting with the public, such as pharmacists, grocery store workers and transit employees, are slated to receive the vaccine in a second distribution phase, while Florida included all essential workers on a U.S. Homeland Security list.

But that Homeland Security department list, spanning more than 25 major industries, makes up nearly 70% of the U.S. labor force, according to researchers at the National Bureau of Economic Research.

In North Carolina, which has one of the most detailed distribution plans spanning nearly 150 pages, workers in meatpacking, seafood, poultry and food processing, transportation and retail would be included in an early phase so long as they had at least two chronic conditions that put them at high risk.

Pennsylvania’s distribution plan on the other hand only includes three pages, stating merely that those “contributing to the maintenance of core societal functions” would be prioritized.