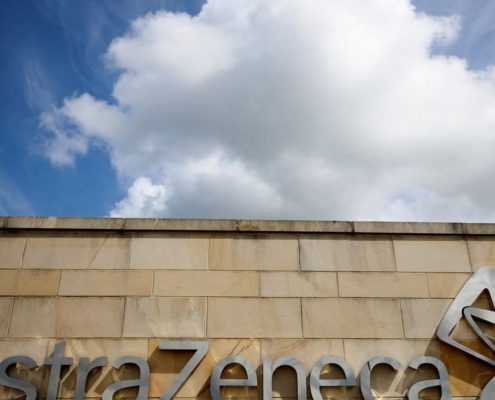 LONDON, May 17 (Reuters) – AstraZeneca (AZN.L) moved to bolster its COVID-19 portfolio of antibodies on Tuesday with a $157 million licensing deal for experimental therapies developed by newly launched biotech RQ Bio.

In addition to the initial sum, the Anglo-Swedish drugmaker faces possible royalty payments as part of the exclusive licence to develop pre-clinical COVID antibodies engineered by RQ Bio, the start-up said. AstraZeneca announced the deal but not its size.

The antibodies include those designed to target people with compromised immune systems – such as AstraZeneca’s own antibody cocktail, Evusheld, which has already been approved in multiple countries.

The deal gives AstraZeneca the rights to develop and sell six antibodies, none of which has been tested in humans so far, RQ Bio CEO Hugo Fry said in an interview with Reuters.

In lab studies, the antibodies have been shown to work against all known variants, including Omicron, he said.

A company logo is seen at the AstraZeneca site in Macclesfield, Britain, May 11, 2021. REUTERS/Phil Noble/File Photo

Access to a fresh crop of COVID antibodies will bolster AstraZeneca’s COVID portfolio, which is expecting to see a rapid decline in COVID vaccine sales in 2022.

The Anglo-Swedish drugmaker’s vaccine was its second bestseller last year, but it has struggled to compete with rivals made by Pfizer (PFE.N) and Moderna (MRNA.O), and has hit setbacks with production, rare side-effects and relatively limited shelf life.

AstraZeneca’s Evusheld – which is designed to prevent symptomatic COVID infections in people who are unable to derive maximum benefit from vaccines – is expected to partially offset waning vaccine sales.

It has been possible to manufacture antibodies – proteins that latch on to thwart the body’s assailants both foreign (such as viruses and bacteria) and domestic (like cancer cells) – for some time.

Their use, however, has been limited to relatively niche conditions, such as patients with certain cancers, Fry said.

More recently, and particularly as the COVID crisis unfolded, the scientific understanding of what antibodies can do and the ability to make them cheaply and consistently has increased.

“We’re at this tipping point now…where you can use them a lot more broadly,” said Fry.

RQ Bio is hoping to capitalise on this opportunity as scientists anticipate recurrent anti-COVID shots.

Founded by scientists formerly on Britain’s COVID antibody taskforce – the company launched on Tuesday with funding from the AstraZeneca deal. It aims to make antibodies for vulnerable people at risk of severe disease or death from a range of viral infections.