One of the industry’s most celebrated creative leaders, who spent the last two years as Chief Creative Officer at The Bloc before he resigned in February, Romero said the move to join Klick was “a no-brainer.”

“At Klick, I can focus on the future by going back to my roots,” Romero explained. “I want to go back to the basics and get close to the work, again. I want to push the work forward by focusing more on craft and storytelling, and Klick was open to that. They’re open to doing something different and they have the grit and entrepreneurial spirit to actually make a difference. It’s the perfect match for me.”

Marking Klick’s launch of The Workshop

“We are thrilled to welcome Bernardo to Klick as we continue to elevate our craft and develop breakthrough work that leads to positive health outcomes,” said Rich Levy, Chief Creative Officer. “Every great team has someone who makes them better. In professional football, it’s Tom Brady and, in our industry, that person is Bernardo. He sees things most people don’t and just naturally raises the caliber of the game for everyone, including me. This is a win-win-win; for Klicksters, for our clients, and for our industry.”

“As Maker, Bernardo will help our team invent unique, new ways to tell the most important stories in health,” Levy continued. “He’s also going to mentor and run master classes on subjects like art direction and typography—all to evolve our craft and optimize the work we do for our clients, and the patients and physicians they serve.”

He said Romero’s arrival at Klick also marks the launch of an internal team called The Workshop, composed of Makers, Concepters, Noodlers, and Doodlers. “The Workshop will serve as a place to help everyone make the work better. A place where it is safe to experiment with new ways to create new ideas.” Romero doesn’t have any book of business nor any direct reports. In fact, he was quick to point out that he sees the opposite as true. “This role has a dotted line to Klicksters.”

He joins Klick after having worked with some of the world’s most iconic brands, including Adidas, Bayer, Budweiser, ESPN, Gatorade, Heinz, Lilly, Mitsubishi Motors, Nissan, Pfizer, P&G, and Telefónica. Romero attributes having diabetes and his quest to find greater purpose as influencing factors in his move to the healthcare marketing space in 2016, after almost 15 years working in consumer advertising across the globe.

According to Levy, the life sciences industry is better for it. A healthcare agency under Romero’s creative leadership ranked on Cannes Lions’ 2020 and 2021 “Of The Year” lists alongside the most fêted general consumer agencies in the world—marking an important first step in fighting the stigma that surrounds healthcare advertising and demonstrating that great work can happen anywhere. Romero also delivered a memorable 2017 Cannes Lions keynote talk on how restrictions can spark innovation in healthcare.

In 2020, he co-wrote and co-art-directed “Instant Doctor,” the unnerving short film about a world without human healthcare, which was honored with more than 60 International film accolades, including a New York international Film Award, as well as four Oscar®- and one BAFTA®-Qualifying Official Selections.

His work has received critical acclaim with distinctions that include 37 Cannes Lions, 80 Clios (including 4 Grand Clios) 15+ D&AD pencils, two Grand LIAs, four Gold ANDYs, and 10+ The One Show pencils. In 2015, Lürzer’s Archive called him the “Number One Art Director” in the world. Most recently, he served as 2021 Clio Health Jury Chair and 2019 London International Awards Craft Jury President. He has contributed his expertise on juries at the Cannes Lions Health Festival, The One Show, US Cannes Young Lions, and The One Club’s Young Guns. 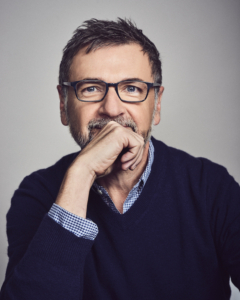 Today’s news comes three years to the day since Levy, who Romero calls “the best Chief Creative Officer in the industry,” was named Klick’s inaugural Chief Creative Officer. It also marks a notable reunion for Romero and Levy. They worked together from 2016 to 2018 at AREA 23 and FCB Health Network before Romero became Executive Creative Director, Healthcare & Wellness at Grey New York and Levy joined Klick. Said Levy, “Having Bernardo join our team is a part of my ongoing mission to help Klick reach its fullest potential.”

It also serves as the latest chapter in Klick’s ongoing success story, as the large independent agency thrives, celebrates its 25th Anniversary, and reaffirms that “There’s something different here.” In March, Klick announced continued growth, with other senior talent additions company-wide, and strategic new practice areas and offerings. It also announced it will host Klick Ideas Exchange on Thursday, September 22 in New York City to explore the ideas shaping the future of health.

Klick Health is the world’s largest independent commercialization partner for life sciences. For over two decades, Klick has been laser-focused on developing, launching, and supporting life sciences brands to maximize their full market potential. Klick was named a Large Agency of the Year for both 2020 and 2021 by Medical Marketing + Media (MM+M), marking 10 Agency of the Year industry awards in 10 years. Follow Klick Health on Twitter at @KlickHealth. For more information on joining Klick, go to careers.klick.com.