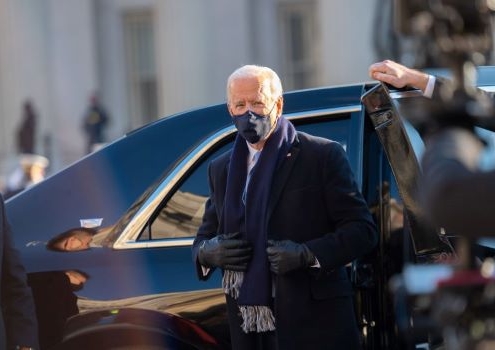 Hours after being sworn in as the 46th President of the United States, Joe Biden signed 10 executive orders that are aimed at combating the ongoing COVID-19 crisis.

Among the orders signed by the newly sworn-in president, one order mandates the wearing of face masks on federal property, and also requires masks on public transportation. The Biden order also calls for travelers entering the country to have a negative COVID test before being allowed to enter.

Biden also directed government agencies to use wartime powers that require companies to make masks, swabs and other equipment to fight the pandemic. The act was previously used by the Trump administration to make ventilators used by hospitals for the most serious COVID-19 patients in intensive care units.

The order also stresses the importance of increased testing, as well as an increase of funds to states and local governments to help with vaccines.

“To control the COVID-19 pandemic and safely reopen schools and businesses, America must have wide-spread testing,” the plan says, according to a CNBC report. 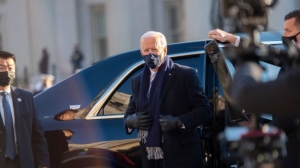 Biden signed the orders days after the one year anniversary of the first COVID-19 case in the United States and after the death toll in this country crossed the 400,000 mark. The U.S. death toll from COVID-19 is growing at a rate of about 3,000 people per day.

“The National Strategy provides a roadmap to guide America out of the worst public health crisis in a century,” the plan says, according to a breakdown from CNBC. “America has always risen to the challenge we face and we will do so now.”

The executive orders support proposals Biden made ahead of his swearing in. Biden has expressed confidence that using the Defense Production Act will bolster the supply of vaccines available to those who are currently eligible and will meet a goal of administering 100 million doses in his first 100 days of office. Biden’s plan also calls for new community vaccination centers and launching mobile vaccination clinics in hopes of reaching more rural populations.

Jeff Zients, a former member of the Barack Obama administration and current coordinator of the White House COVID-19 response team, said during a conference call Wednesday that the orders signed by Biden are just the beginning of what the administration plans to do.

“We feel confident that we can meet our 100 million shots in 100 days. But that is really just the start of where we need to be. We have to vaccinate as much of the U.S. population as possible to put this pandemic behind us, but we don’t have the infrastructure,” Zients said, according to CNBC.

Not only is the order urging an increase in vaccination efforts with the two mRNA medications authorized by the U.S. Food and Drug Administration, the Biden team is encouraging the pharma industry to continue to invest in the development of antivirals and other therapeutics that can be used in the treatment of infections. An executive order called “Improving and Expanding Access to Care and Treatment for COVID-19,” aims to establish a new drug discovery and development program that emphasizes diversity in clinical trials, CNBC noted.

Some of the proposals will likely hinge on a proposed $1.9 trillion stimulus package Biden called for last week. Biden’s stimulus proposal, called the American Rescue Plan, would use $20 billion to support increased vaccination efforts and $50 billion to expand testing. The plan also includes $350 billion in state and local government aid and $170 billion for schools.