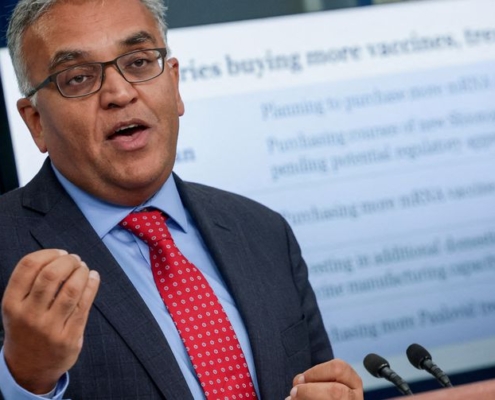 Biden may need to ‘claw back’ funding for COVID, Jha says

WASHINGTON, May 12 (Reuters) – The White House is preparing for a scenario in which Congress fails to approve President Joe Biden’s request for additional COVID funds by reviewing old contracts to see if there is any money it can “claw back,” the president’s top COVID adviser said on Thursday.

The United States is still in a pandemic and continues to face an evolving coronavirus despite making strides over the past two years, White House COVID-19 response coordinator Ashish Jha told Reuters in an interview.

“We have 80-plus-thousand infections happening a day, hundreds of people are still dying every day. We still have a whole host of challenges,” Jha said when asked if the government would lift a public health emergency declaration related to the virus.

“The pandemic continues and we’re going to continue working on fighting the pandemic and getting it under much better control,” he said.

Congress passed one of the largest economic stimulus measures in American history, a sweeping $1.9 trillion COVID-19 relief bill without any Republican votes, in March 2021.

But the White House’s request this year for billions of dollars in additional funds it says are urgently needed has been stalled amid disagreements over whether it is needed and how to pay for it as well as Republican arguments that not all of the previously approved funding had been spent.

Jha said the administration was studying what it could do if Congress did not provide the funding.

“We are right now going through all of the existing contracts, all of the commitments, trying to think about where can we claw back some money. What is the minimum we can do?” he said. “We want to make sure that we’ll have some money for at least some vaccines for maybe the highest risk people. That’s not the ideal. We will run out of money for tests. We will run out of money for treatments.”

The Biden administration has seen models that project an estimated 100 million people getting COVID over the coming fall and winter, assuming resources are limited, according to a senior administration official.

Jha said the U.S. and the globe were vulnerable because the virus has continued to evolve and achieve more “immune escape,” meaning it can evade or escape antibodies.

“If you were infected in December or last year, the level of protection that offers over time wanes.” That is also true with vaccinations, he said.

Jha, a physician and an academic, took over as White House COVID-19 coordinator from Jeff Zients last month. His short tenure has been marked by the conflict with Congress over funding and comes at a time when the administration has largely attempted to give Americans the normalcy they crave while being ready for future surges and virus variants.

Dr. Ashish Jha, Coordinator of the COVID-19 Response, speaks to reporters during the daily press briefing at the White House in Washington, U.S., April 26, 2022. REUTERS/Evelyn Hockstein/

With enough resources, Jha said there would be another vaccine campaign in the fall, with vaccines available for all Americans.

“My expectation is that, with resources, we’ll be able to have a broad swath of the American people eligible for those vaccines,” he said.