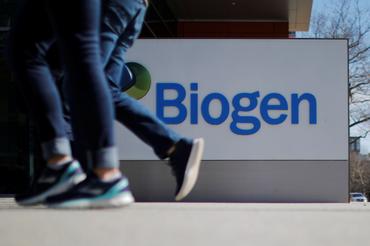 (Reuters) – Biogen Inc will take a $650 million stake in Sage Therapeutics and make an upfront payment of $875 million to jointly develop and sell treatments for depression and other neurological disorders, the two companies said on Friday.

An estimated 16 million Americans experience symptoms of MDD each year, according to the U.S. Center for Disease Control and Prevention.

Analysts said the agreement will help strengthen Biogen’s pipeline with two treatments that have blockbuster potential at a time when it faces uncertainty over approval of its experimental Alzheimer’s drug, aducanumab.

Under the terms of the agreement, Biogen will buy about 6.2 million newly issued shares of Sage for $104.14 apiece, a 26% premium to Sage’s Wednesday closing price.

Apart from the $1.525 billion in cash, Sage will also be eligible to get up to $1.6 billion in potential milestone payments.

Biogen will jointly market the drugs in the United States and get the exclusive rights to sell the drugs outside of the country, excluding rights to zuranolone in Japan, Taiwan and South Korea.

Shares of Sage, which entered the depression drugs market in 2019 with its postpartum treatment, Zulresso, fell nearly 6% in afternoon trading.

FILE PHOTO: A sign marks a Biogen facility, some of whose employees tested positive for the coronavirus after attending a meeting in Boston, in Cambridge, Massachusetts, U.S., March 9, 2020. REUTERS/Brian Snyder/File Photo

Jefferies analyst Andrew Tsai said investors might be worried about the timing of deal as Sage is likely to report data from late-stage trial of zuranolone in first half of 2021 that are largely expected to be positive.

“Investors will ask, why do the deal for less now, as opposed to waiting for positive data in 2021, which is only three to six months away,” Tsai said.

Reporting by Mrinalika Roy in Bengaluru; Editing by Arun Koyyur

U.S. vaccine plans take shape but no let-up on restrictions
Scroll to top