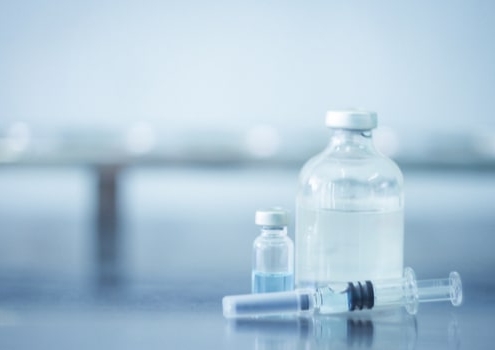 Speaking to Reuters TV, Chief Executive Ugur Sahin said if all goes well, the U.S. Food and Drug Administration could grant emergency-use approval towards the end of the first half of December or early in the second half.

Conditional approval in the European Union could be achieved in the second half of December, he added.

“It will depend on the requests that we will receive and whether all the conditions are met,” he said.

Earlier on Wednesday, the partners unveiled trial results showing their shot had a 95% efficacy rate across different age groups and no serious side effects, a major milestone in the race to end the pandemic.

Sahin said that any coronavirus vaccine that clears regulatory hurdles over the next few months will be lapped up by health systems around the world regardless of its relative merits as demand will far outstrip supply.

FILE PHOTO: Syringes are seen in front of displayed Biontech and Pfizer logos in this illustration taken November 10, 2020. REUTERS/Dado Ruvic/Illustration

“I don’t really expect a competitive situation over the first nine months because every dose of approved vaccine that anyone can supply is welcome and will likely be used.”

Moderna Inc MRNA.O on Monday released preliminary data for its vaccine, showing 94.5% effectiveness. AstraZeneca AZN.L, working on a vaccine with Oxford University, is expected to release results from its mass trial before year-end.

“The first five to eight companies (to win approval) will not stand in each other’s way… I assume it won’t be before mid-2021 that each vaccine will have to distinguish itself with a specific profile,” said Sahin.

He added that BioNTech and Pfizer were working on a refined formulation of the vaccine that will not require ultra-cold storage for easier handling in developing countries.

The more robust version would likely be launched during the second half of next year, he said.

For now BioNTech’s vaccine must be stored and transported at -70C though it can be kept in a normal fridge for up to five days, or up to 15 days in a thermal shipping box.

Biopharma Money on the Move
Scroll to top