CAMBRIDGE, Mass. – Since its founding, Seres Therapeutics has been a leader in the microbiome space and is blazing a trail with its gastrointestinal-focused therapies for ailments such as C. difficile and ulcerative colitis.

That successful approach has allowed the company to grow at a quick pace. In 2015, Seres went from 25 employees to 86, Carlo Tanzi, head of investor relations at Seres told BioSpace (DHX). While Seres has seen explosive headcount growth over the past year, the company is planning for more. Seres is expanding its physical footprint in Cambridge, as well as hiring additional staff.

In an exclusive interview with BioSpace, Tanzi and Seres’ Chief Financial Officer Eric Shaff, provided a blueprint for what is expected to happen at Seres over the coming months and the rest of 2016. 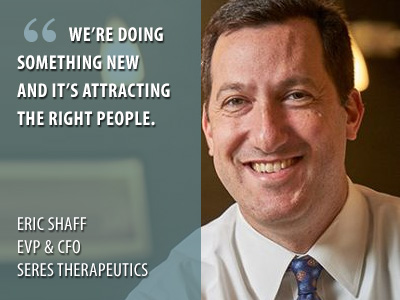 “What we’re seeing in our laboratories every day is exciting stuff,” Shaff said.

Shaff said the catalyst behind the company’s growth is how the microbiome can be effective in infectious diseases.

Seres is developing therapies targeting the human microbiome, the bacteria residing in the gastrointestinal tract, with a particular focus on C difficile, ulcerative colitis, as well as some work on immunology and metabolic diseases. Seres’ exciting research includes recent positive data for its recurrent C. difficile treatment, SER-109, that earned it a breakthrough therapy designation from the U.S. Food and Drug Administration and has the company clearly eying commercialization of the product. Seres is also developing SER-262, a synthetic therapy for primary C. difficile, a first-time diagnosis. These oral therapies are considered to be one-shot treatments that will replicate within the GI tract and stave off any future occurrences, becoming a virtual cure, Tanzi said. That notion of a virtual cure is backed up by positive Phase Ib clinical data that showed the company’s experimental therapeutics provided a clinical cure in 29 of 30 patients, Shaff said.

“There’s quite an opportunity before us to help patients and I think people will see that more and more as time goes on,” Shaff said.

The success of its research is sparking the continued expansion at Seres. In November, Seres signed a lease to take over 83,000 square feet of space in the old Vertex (VRTX) building in Cambridge, which will provide much needed new laboratory and office space. Shaff said the move was necessary because the company is “busting at the seams in our current facilities.” Shaff said their aspiration is to continue to grow as they focus on “interesting opportunities” to help patients. With the new space, Shaff said he anticipates the company will be hiring new employees.

“With the almost tripling of headcount, we’re careful to bring in the right group of people with the right cultural values,” Shaff said. “We’re doing something new and it’s attracting the right people.”

Founded by Flagship Ventures, Seres is well financed, having raised $110 million in various financing rounds and then in June 2015, the company went public raising another $140 million. Like many newly public pharma and biotech stocks this year, shares of Seres are down from its opening IPO price of $51.40. Still, the stock has been a steady performer and is currently trading around $30.49 per share. Tanzi said the company is sitting on enough cash reserves to finance operations for the next two years.

Last year, Seres struck a $1.9 billion deal with Nestle Health Science to further develop treatments for C. difficile and inflammatory bowel diseases, including ulcerative colitis and Crohn’s disease. That partnership is additional proof of the efficacy of the therapy, Shaff said. SER-109 will be moving into Phase III trials this year.

Shaff said the company lives by a mantra that if you create valuable programs, then financial value will follow.

Although Seres Therapeutics is growing and moving into new facilities, Shaff said it was important for the company to remain in the Cambridge area and be a part of the “Cambridge biotech ecosystem.” With the number of universities and talent pool from other pharma companies, Shaff said the area is an “incredible and unique place to be.”