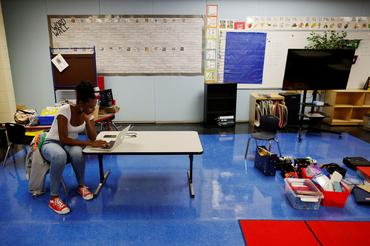 (Reuters) – Students in Boston’s public schools will shift to remote learning beginning Thursday due to the rising COVID-19 infection rate in the city that was ravaged by the pandemic in the spring.

“We have said all along that we will only provide in-person learning for students if the data and public health guidance supports it, and this new data shows that we are trending in the wrong direction,” Boston Mayor Martin Walsh said in a statement.

Boston, which serves more than 55,000 pre-K through grade 12 students, allowed some highest need pupils back to the classroom on Oct. 1 after starting remote learning on Sept. 21.

“I am heartbroken that today we have to close our doors to our highest need students,” Superintendent Brenda Cassellius said in a statement. “Our families are desperate for these services for their children, many of whom are non-verbal and unable to use technology in the home.” 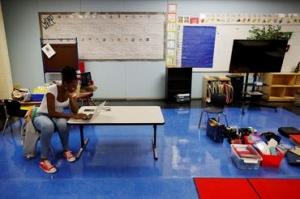 FILE PHOTO: Kindergarten teacher Princess Bryant prepares her classroom, from where she will begin the new school year teaching classes virtually because of the coronavirus disease (COVID-19) pandemic, at the Tynan Elementary School in Boston, Massachusetts, U.S., September 18, 2020. REUTERS/Brian Snyder

Massachusetts is averaging over 700 new cases a day over the last seven days, up 13% from a week ago and the highest seven-day average of new cases in the state since late May, according to a Reuters analysis.

The number of hospitalized COVID-19 patients hit 517 on Tuesday, the highest level since late July. However, only 1% of tests are coming back positive for COVID-19, one of the lowest levels in the country, suggesting that the states is catching new outbreaks and keeping infections under control. Several states in the Midwest and West have positive test rates of over 20%.

School districts across the United States have been grappling with reopening plans during the coronavirus pandemic.

In New York City, home to the nation’s largest public school system, officials ordered some schools to revert to remote learning earlier this month after infections spiked in a few areas.

Mayor Bill de Blasio said on Tuesday that testing in New York City schools outside of those areas had revealed only a small number of positive cases.

After testing 16,348 students and staff in the week ended Friday, only 28 results, or 0.17%, were positive, de Blasio said, calling the results “remarkable.”

In Los Angeles, the second-largest school district in the country, schools remain closed for in-person education for most students.

Chicago Public Schools, attended by 361,000 students, plans to reopen schools to pre-K and students in some specialized programs later in the second quarter, which ends Feb. 4. School officials have not announced plans for other students.

When students and teachers return to school buildings in the third-largest school district in the United States, they will have their temperature checked each day and be required to wear a face covering. Desks will be placed far apart and hand sanitizer stations will be installed throughout the buildings.