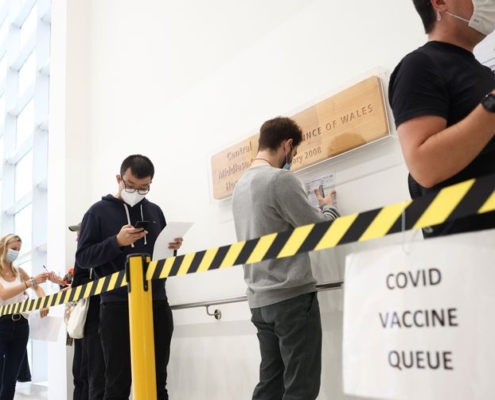 (Reuters) – A British public health study has found that protection from either of the two most commonly used COVID-19 vaccines against the now prevalent Delta variant of the coronavirus weakens within three months.

It also found that those who get infected after receiving two shots of either the Pfizer-BioNTech (22UAy.DE) or the AstraZeneca (AZN.L) vaccine may be of greater risk to others than under previous variants of the coronavirus.

Based on more than three million nose and throat swabs taken across Britain, the Oxford University study found that 90 days after a second shot of the Pfizer or Astrazeneca vaccine, their efficacy in preventing infections had slipped to 75% and 61% respectively.

That was down from 85% and 68%, respectively, seen two weeks after a second dose. The decline in efficacy was more pronounced among those aged 35 years and older than those below that age.

“Both of these vaccines, at two doses, are still doing really well against Delta… When you start very, very high, you got a long way to go,” said Sarah Walker, an Oxford professor of medical statistics and chief investigator for the survey.

Walker was not involved in work on AstraZeneca’s vaccine, which was initially developed by immunology experts at Oxford.

The researchers would not project how much more the protection would drop over time, but suggested that the efficacy of the two vaccines studied would converge within 4-5 months after the second shot. 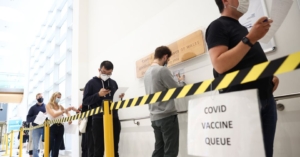 People queue to receive a dose of the Pfizer BioNTech vaccine at the Central Middlesex Hospital in London, Britain, August 1, 2021. REUTERS/Henry Nicholls

Highlighting the increased risk of contagion from the Delta variant, the study also showed that those who do get infected despite being fully vaccinated tend to have a viral load similar to the unvaccinated with an infection, a clear deterioration from when the Alpha variant was still dominant in Britain.

The Oxford findings are in line with an analysis by the U.S. Centers for Disease Control and Prevention (CDC) and come as the U.S. government outlines plans to make COVID-19 vaccine booster shots widely available next month amid a rise in Delta variant infections. It has cited data indicating diminishing protection from the vaccines over time. read more

Pfizer has said its vaccine’s efficacy drops over time. Last month AstraZeneca said it was still looking into how long its vaccine’s protection lasts and whether a booster dose would be needed to keep up immunity. read more

Herd immunity is when a large enough portion of the population is immune to a pathogen, either by vaccination or prior infection, stopping infection numbers from growing.

The authors cautioned that the viral concentration in the throat was only a rough proxy for severity of symptoms and that they had no new data on the duration of infections.

The survey, which has yet to be peer-reviewed before publication in a scientific journal, underscores concerns by scientists that the Delta variant, first identified in India, can infect fully vaccinated people at a greater rate than previous lineages, and that the vaccinated could more easily transmit it. read more

People queue to receive a dose of the Pfizer BioNTech vaccine at the Central Middlesex Hospital in London, Britain, August 1, 2021. REUTERS/Henry Nicholls

The study was conducted in partnership with Britain’s Office of National Statistics (ONS) and the Department for Health and Social Care (DHSC).