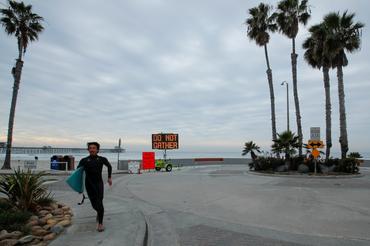 Beginning on Thursday, people in California can activate the exposure notifications tool from the settings menu on iPhones or by downloading the CA Notify App in the Google Play store on Android devices.

The apps enable Bluetooth signals between devices to determine when they are in close proximity, and the apps then anonymously alert users when a recent contact later tests positive. At least 6 million people in the United States have tried the system in recent months across the 21 states and two territories that made apps available before California. Colorado and New York are among other states with apps.

Public health experts say adoption has lagged because of technical shortcomings in the earliest apps, privacy concerns and dismissive attitudes toward taking precautions to avoid the virus. But California officials hope the app will be adopted quickly in a state that is home to many tech workers.

The state’s two most densely inhabited regions and its agricultural breadbasket went under stay-at-home orders in the last couple of days as the pandemic strains hospitals in the most populous U.S. state.

CA Notify had been tested on state university campuses since September. The University of California San Diego will continue to oversee the system and staff a user support phone hotline.