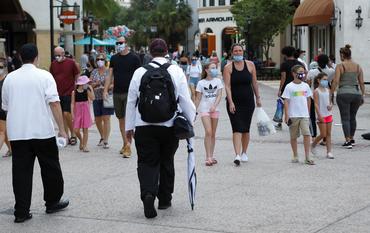 SACRAMENTO (Reuters) – California’s governor on Monday clamped new restrictions on businesses as coronavirus cases and hospitalizations soared, and the state’s two largest school districts, in Los Angeles and San Diego, said children would be made to stay home in August.

Governor Gavin Newsom, a Democrat, ordered bars closed and restaurants, movie theaters, zoos and museums across the nation’s most populous state to cease indoor operations. Gyms, churches and hair salons must close in the 30 hardest-hit counties.

“It’s incumbent upon all of us to recognize soberly that COVID-19 is not going away any time soon, until there is a vaccine and/or an effective therapy,” Newsom said at a news briefing.

The governor called the move critical to stemming a surge in COVID-19 cases that have strained hospitals in several of California’s rural counties.

The public school districts for Los Angeles and San Diego, which instruct a combined 706,000 students and employ 88,000 people, said in a joint statement they would teach only online when school resumes in August, citing “vague and contradictory” science and government guidelines.

The districts said countries that have safely reopened schools have done so only after establishing declining infection rates and on-demand coronavirus testing.

“California has neither,” the statement said, adding, “The sky-rocketing infection rates of the past few weeks make it clear the pandemic is not under control.”

The union representing Los Angeles teachers applauded the strategy in a separate statement released shortly after the school shutdowns were announced.

“In the face of the alarming spike in COVID cases, the lack of necessary funding from the government to open schools safely and the outsized threat of death faced by working-class communities of color, there really is no other choice that doesn’t put thousands of lives at risk,” United Teachers Los Angeles said.

Brenda Del Hierro, who has two children in Los Angeles schools, said resuming traditional instruction was important but the hazards had to be considered. “For their social and emotional wellbeing they need to go back to school. But at the end of the day there is too much of a risk,” she said.

The decision to cancel in-person classes puts the districts at odds with U.S. President Donald Trump, who has said he might withhold federal funding or remove tax-exempt status from school systems that refuse to reopen. Most education funding comes from state and local governments.

Administration officials have said data do not suggest attending school would be dangerous for children because their infection rates are far lower than the population at large.

In response to the California districts’ announcement, the White House reiterated that the ideal scenario is for students to go to school. “Hopefully Los Angeles and San Diego can get there soon as well, as that is what is best for children.” spokesman Judd Deer said.

Newsom, who has said during the pandemic that it was up to local school districts to determine how best to educate their students, cheered the announcements by Los Angeles and San Diego. 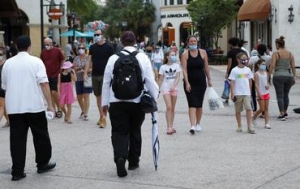 But Republicans criticized the governor for failing to issue statewide guidelines for schools during the health crisis.

“While he continues to blame Californians for his failure in leadership, his demands to close our small businesses and lack of direction on opening schools will further harm California’s school children and the small businesses that fuel our economy,” Jessica Millan Patterson, chairwoman of the California Republican Party, said in a written statement.

California, along with Florida, Arizona and Texas have emerged as the new U.S. epicenters of the pandemic. Infections have risen rapidly in about 40 of the 50 states over the last two weeks, according to a Reuters analysis.

Despite nearly 28,000 new COVID-19 cases in the last two days in Florida, Disney World in Orlando welcomed the public on Saturday for the first time since March with guests required to wear masks, undergo temperature checks and keep physically apart.