Israel-based drugmaker Teva Pharmaceutical (TEVA) is snapping up Allergan Plc’s generic drug business for $40.5 billion, the company announced this morning. Under terms of the agreement, Allergan will receive $33.75 billion in cash and shares of Teva valued today at $6.75 billion, representing an estimated under 10 percent ownership stake in Teva, the company said. […]

Allergan Plc (AGN.N) is considering a breakup of the company into two businesses, a person familiar with the matter told Reuters on Friday, potentially adding the botox-maker to a list of large drugmakers realigning themselves to focus on specific areas of their businesses. Allergan is considering keeping its branded drugs business but spinning off or […] 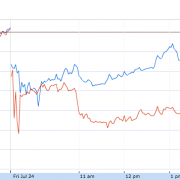 Anthem and Cigna, which announced a $54 billion merger on Friday morning, probably won’t be able to consummate their deal for at least a year. Regulators are beginning to closely scrutinize the two companies’ agreement — the largest-ever deal in the history of the insurance industry — and will need months to decide whether to allow the merger to go […]

Bristol-Myers Squibb Co on Thursday reported far better than expected quarterly results thanks largely to delayed reimbursement for two hepatitis C treatments in France and demand for other leading company medicines. Shares of the U.S. drugmaker, which raised its full-year profit forecast because of the strong second-quarter results, rose almost 3 percent in pre-market trading. […]

Indianapolis-based Eli Lilly and Company (LLY) announced today that it is expanding its Lilly Biotechnology Center in San Diego, Calif, increasing its space by 140 percent and staff by 70 percent. The company is adding another 175,000 square feet of work space and an additional 130 new jobs. Recruitment is expected in discovery chemistry, research […]

Lupin Ltd. (LUPN.BO), India’s fourth largest pharmaceutical company, will increase its presence in the United States after striking an $880 million deal to acquire privately held Gavis Pharmaceuticals LLC, the company announced this morning.   The acquisition will increase Lupin’s presence as a generic drug supplier in the United States and will also broaden Lupin‘s […]

An appeals court ruled that Novartis AG could begin the first U.S. sales of a knockoff biotech drug on Sept. 2, a key step in efforts to contain spending on high-cost therapies through lower-priced competition. The ruling Tuesday by the U.S. Court of Appeals for the Federal Circuit in Washington came on the same day […]

NEW YORK, July 22, 2015 /PRNewswire/ — After 15 years of steady growth and evolution, The CementBloc announced its move to new flagship headquarters in downtown New York.  Additionally, its leaders announced that the company is officially changing its name to “The Bloc.” “Over the last 15 years, we have built one of the largest independent […]