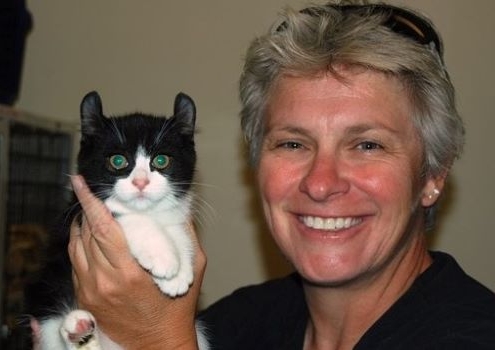 Cats are Just Like Us, Presenting Opportunities for Personalized Medicine

It might not surprise most cat lovers to learn that humans share the most genetic similarities with the domestic feline – except that in people, the gene that determines whiskers fails to turn on, and most human spines would cringe at the gymnastics these furry friends are able to do.

New research, published July 28 in Trends in Genetics by Dr. Leslie Lyons, Gilbreath-McLorn endowed professor of comparative medicine at the University of Missouri College of Veterinary Medicine, could be instrumental to the development of personalized therapeutics for both two and four-legged patients.

The findings are a culmination of decades of genome DNA sequencing by Lyons and her team, which have resulted in a nearly 100% complete assembly of the cat genome.

“I think, actually, the cats picked me,” said Lyons, who began her career in medicine working in a cat lab at the National Cancer Institute. “I thought I’d like to work in a different species where I’d be able to make more of a niche and have more of an impact.”

The human genome is made up of approximately 20,000 genes and 3 billion base pairs of DNA. Lyons explained that only 2% of this DNA is coded into proteins that allow our bodies to perform natural functions. While scientists have long known of the similarities between cats and humans, Lyons’ lab is now turning its attention to the other 98%.

This mysterious section of the genome, known as “dark matter” DNA, is the spacer, or non-coding DNA between the genes. Scientists now believe that it is instrumental to gene regulation, which ensures that the right genes are expressed at appropriate times and helps organisms to respond to their outside environment.

This discovery means that researchers can study these regulatory sequences in order to create more effective therapies for genetic and inherited diseases like polycystic kidney disease, hypertrophic cardiomyopathy and inherited cancers.

During the early days of the COVID-19 pandemic, these similarities helped to inform the use of remdesivir as a therapeutic. As it turned out, the SARS-CoV-2 virus also causes a potentially fatal illness in cats.

“A few years ago, we learned the drug remdesivir was effective in curing cats of feline infectious peritonitis. So,  when the pandemic began, we knew we could consider it to treat humans with COVID-19 because the receptors for the virus are similar between cats and humans,” Lyons said. 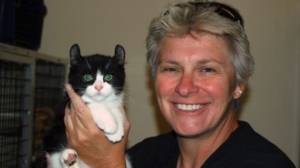 Lyons spoke to the impact studying the right model has on translational medicine.

“We’ve always known that the cat was more organized, like humans, but we weren’t taking advantage of that,” she said. “Cats have polycystic kidney disease and they’re big enough that you can image their kidneys, where the mouse and rat kidney is too small to do that. Cats also live longer, so you can do a longer clinical trial on a drug than you can with a mouse.”

Leveraging these similarities could also lead to expedited clinical trials and an increased success rate.

“Companies develop these drugs and it takes them years and millions to billions of dollars to do it, and most of the time, they fail when they get to human clinical trials. If we had another intermediate model such as the cat or the dog, depending on the disease, then maybe we will have less failure,” Lyons said.

Along with rare genetic diseases, cats and humans share a number of common diseases, including asthma, diabetes, obesity and high blood pressure. By studying the cat, Lyons hopes to get a better handle on these complex illnesses and create medicines that help both humans and animals.

“We’d like to look at more complex diseases where we know there are both environmental interactions and the interactions of several genes. Also, susceptibility and resistance to the flu, to coronavirus,” she said. “We see that some people have different responses, and it’s not going to be one thing, it’s going to be a whole multitude of things. Maybe the cat can give us one piece of that puzzle and another species can give us the other piece, and in the end, we can put the whole puzzle together.”

Lyons’ research has already had a positive impact on veterinary medicine, particularly for cats who suffer from Chediak-Higashi syndrome, a rare condition affecting both humans and cats that weakens the immune system, leaving the body more vulnerable to infections. In a project conducted with the Cincinnati Zoo, Lyons isolated the DNA mutation responsible for the condition.

Lyons’ lab is part of the University of Missouri’s NextGen Precision Health Initiative, which brings together capabilities and innovation from across the system’s four research universities in search of personalized healthcare advancements.