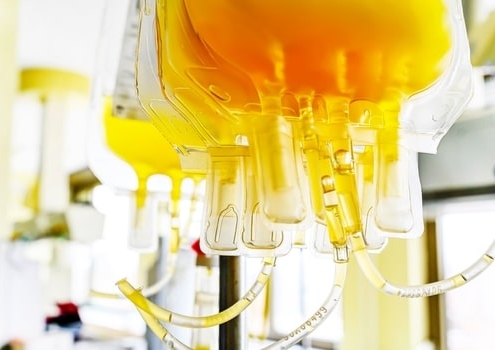 Convalescent plasma as a treatment for COVID-19 infections has demonstrated mixed results at best in terms of efficacy, and a recent trial in Argentina provides additional fuel to that conversation. The study showed the use of convalescent plasma provided no clinical benefit nor improved mortality in COVID-19 patients with pneumonia.

The study assessed the use of convalescent plasma in COVID-19 patients with severe pneumonia. After 30 days, Hospital Italiano de Buenos Aires reported that there no differences between the group treated with convalescent plasma and the placebo group, according to a report in MedPage Today. There was also no difference in mortality rates, the report shows. Data from the study was shared in the New England Journal of Medicine.

Patients included in the PlasmAr study were eligible if they tested positive for SARS-CoV-2, had radiologically confirmed pneumonia and no previous directives rejecting advanced life support, and at least one of the criteria for severity, such as oxygen saturation below 93%, according to the report.

The Argentine study focused on COVID-19 patients with pneumonia, so it is important to note that the same outcome cannot be extrapolated to milder cases of COVID-19.

Convalescent plasma is collected from patients who have recovered from a virus such as the novel coronavirus that causes COVID-19. The idea is that the plasma, which contains antibodies against the virus, will be administered into patients who are critically ill. In March, the FDA created a pathway with strict guidelines for physicians to use convalescent plasma on seriously ill COVID-19 patients. Emergency Use Authorization was granted by the U.S. Food and Drug Administration in August, but only after President Donald Trump accused the FDA of being part of a “deep state” conspiracy to withhold approval of treatments for the coronavirus in order to politically hurt his re-election bid.

The EUA had been held up due to concerns raised by senior U.S. public health policy officials in charge of the national COVID-19 response, including National Institutes of Health Director Francis Collins, National Institute of Allergy and Infectious Diseases Director Anthony Fauci and Clifford Lane, NIAID deputy director. The officials argued the emerging data was not strong enough to support approval under EUA. Trump was critical of the hold placed on the EUA, saying at the time he heard only positive news about the use of the therapy and again suggested that denying the EUA was a move to hurt him politically.

When the EUA was granted, Secretary of Health Alex Azar claimed the use of convalescent plasma provided patients with a 35% survival benefit in patients “who benefited the most” from the treatment. He was citing a Mayo Clinic study, but those claims are not what the data showed. HHS was forced to retract the claim due to Azar’s overstatement of the benefits of convalescent plasma. Not only did HHS have to restate the claims, but FDA Commissioner Stephen Hahn was also forced to walk back some statements he made about the benefits of the treatment.

On Twitter, Former FDA Commissioner Scott Gottlieb concurred that the use of convalescent plasma could be beneficial to some patients, but said more evidence is needed to support that claim.