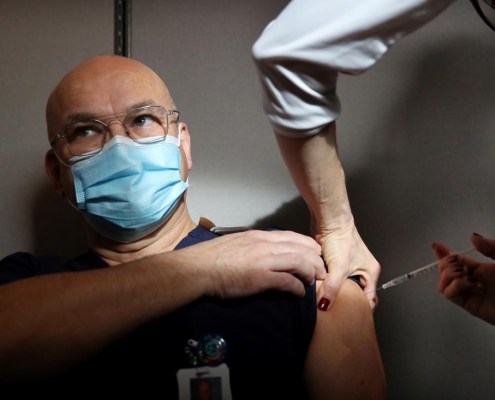 (Reuters) – U.S. coronavirus deaths soared to a daily record of 3,580 and hospitalizations rose for the 19th straight day on Wednesday, ramping up the stakes as regulators on Thursday considered whether to approve a second COVID-19 vaccine.

Another 232,255 cases were reported, the second highest daily case load on record, as California became the first state to report more than 50,000 cases in a single day, according to a Reuters tally.

The United States leads the world with a cumulative 307,767 deaths and nearly 17 million cases as many Americans and the outgoing administration of President Donald Trump have resisted the stay-at-home orders and mask-wearing that have proven effective at controlling the spread.

But more help could be arriving soon with a second vaccine nearing approval from the U.S. Food and Drug Administration. 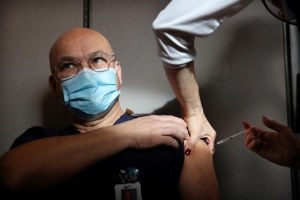 A panel of outside advisers to the FDA is expected to endorse emergency use of Moderna Inc’s coronavirus vaccine on Thursday, one week after the same committee backed the COVID-19 vaccine from Pfizer Inc and German partner BioNTech SE.

The FDA authorized emergency use of the Pfizer vaccine a day later, opening the gates to a massive inoculation program that began on Monday.

Some 570 vaccine distribution centers received the initial batch of shipments on Monday and Tuesday, and an additional 886 locations were due to receive vials on Friday, said U.S. Army General Gustave Perna, chief operating officer of the government’s Operation Warp Speed campaign.

But the first major storm of the winter season could also disrupt vaccine distribution.

With millions of Americans thrown out of work, Congress could soon lend a hand as well.

After months of feuding and with a weekend deadline fast approaching, congressional negotiators haggled over details of a $900 billion COVID-19 aid bill that leaders have vowed to pass before going home this year.

The legislation is expected to include $600 to $700 stimulus checks, extend unemployment benefits, help pay for vaccine distribution and assist small businesses.