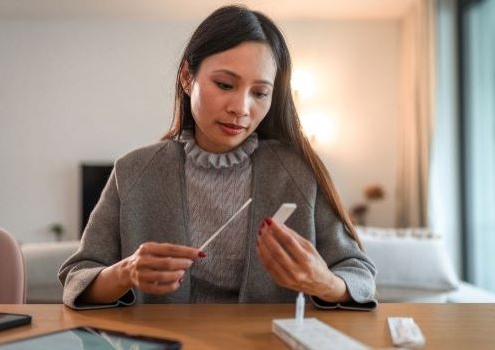 When the COVID-19 pandemic hit, people worldwide couldn’t get tested quickly enough. Lines at health centers stretched for blocks as people anxiously waited to know if they’d been infected. The new virus brought the diagnostic industry to a new level of test manufacturing, and those capabilities have sparked at-home testing for a variety of other conditions and health metrics.

By July 2020 – four months into the pandemic – nose swab tests were still in short supply. The New York Times wrote a dismal report on the scenes happening across the United States. Despite manufacturing more than 26 million swabs, testing was still the “choke point” for pandemic management.

At-home tests were eventually developed, but those too were in short supply. This sparked innovation for genetic testing company Everlywell. Everlywell, which offers direct-to-consumer metabolic and allergy testing, used its at-home testing technology to create a PCR test for COVID-19, which received FDA authorization in 2021. To help get tests out faster, Everlywell partnered with DoorDash to deliver tests to patients at home.

Although at-home testing for COVID-19 has been dismal, the revolution in at-home testing has inspired personal tests for several other illnesses. Tests for the flu and strep throat suddenly appeared on the market, freeing people from waiting in doctors’ offices to receive results.

For some other conditions, developments in self-testing are relief from social stigma. During the pandemic, sexually transmitted infection cases rose sharply, but testing for them declined. Some possible reasons for the decline in testing are the stigma socially associated with such conditions and steep out-of-pocket costs for the test.

As cases continued to climb, the state of California became overwhelmed with the number of patients seeking help for STIs. California became the first state to pass a law requiring health insurance to cover take-home tests for STIs, including HIV, chlamydia and syphilis.

As HIV rates steadily rose during the pandemic, the need for HIV testing did too. TakeMeHome, a public-private partnership was launched in March 2020 as a response to the pandemic. The service provides at-home self-testing kits for HIV that state or local health departments pay for at no cost to the patients.

The at-home testing initiative “could bring better disease monitoring to rural and underserved parts of the state, reduce the stigma patients experience when seeking care and give them more control over their health,” said California Healthline.

At-home tests for pregnancy and fertility testing also saw a surge in demand. Pregnancy test sales skyrocketed 13% between June 2020 and November 2021. Predictive fertility tests also surged because many fertility treatment centers were considered non-essential for most of the pandemic.

Although ovulation-tracking apps have been around for years, there has been a new demand for diagnostic fertility tests—for females and for males—from brands such as Modern Fertility, Everlywell, Let’s Get Checked and Dadi. As one study in Fertility and Sterility reports, 41% of people at a fertility clinic opted for a take-home fertility test when offered the option, even if it wasn’t covered by insurance.

Colorado-based fertility company MFB Fertility received clearance from the U.S. Food and Drug Administration in 2020 for its Proov fertility test, marking a major milestone in considering fertility an essential part of overall health. 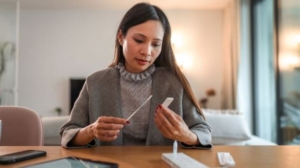 Genetic counseling and screening is another area that saw an uptick in take-home tests. Because telehealth boomed during the pandemic, genetic counselors could still talk with patients, but genetic testing was still difficult without being at the facility in person. To help meet patient needs, Memorial Sloan Kettering Cancer Center made the bold decision to validate performing genetic testing using saliva rather than blood. For the first time, this allowed patients to get a kit in the mail and send their saliva to a lab for testing, rather than having to go a facility to have their blood drawn.

The direct-to-consumer genetic testing market is expected to continue to grow quickly. According to a 2021 report from TMR, a market research and consulting company, at-home genetic testing from companies such as Ancestry, 23&Me and MapMyGenome are appealing as awareness increases about the prevalence of genetic diseases.

As direct-to-consumer testing becomes more popular, diagnostic companies should be ready to bank on new opportunities. New tests are quickly becoming available for a variety of diseases, genetic screenings and health status metrics, and the companies who don’t accommodate the convenience of testing from home may be left behind.