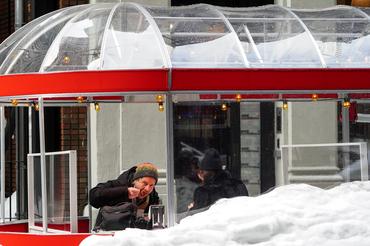 The move to promote theater and music across the state, known as “New York Pops Up,” comes amid a steady improvement in the measures of the spread of the coronavirus, and after many Broadway and other performers have been idle since last year. In October, Broadway theater owners extended their closures to May 31, hoping to reopen in June.

“When you shut down Broadway, when you shut down movie theaters, you stopped an entire industry,” Cuomo said at a news briefing. “Everybody understands why, but we have to now nurture that industry to bring it back.”

The first of 300 pop-up arts events over 100 days, a precursor to the eventual reopening of Broadway’s darkened theaters, will begin on Feb. 20 at Manhattan’s Javits Center with a special performance for healthcare workers, Cuomo said. The convention center has been used during the pandemic as a temporary hospital and vaccination site. 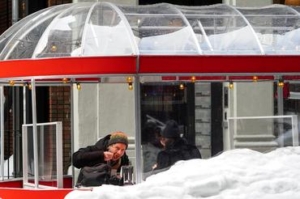 FILE PHOTO: People eat at a taco restaurant outside in a covered enclosure amid the coronavirus disease (COVID-19) pandemic in the Manhattan borough of New York City, New York, U.S., February 3, 2021. REUTERS/Carlo Allegri

Among the many entertainers who have joined the project are musicians Patti Smith and Jon Batiste, and actors Matthew Broderick, Sarah Jessica Parker, Alec Baldwin and Hugh Jackman.

All performances will be free, with little advance notice and virus testing of spectators, and will be available for viewing online, Cuomo said.

“We want the performances,” he added. “We don’t want mass gatherings, we don’t want large crowds.”

Cuomo also moved up the date on which New York City restaurants may reopen their indoor dining rooms at 25% of capacity to Friday Feb. 12 from the previously announced Sunday Feb. 14, which is Valentine’s Day, one of the industry’s busiest days.

The thousands of New York City restaurants that have survived the pandemic-induced shutdowns since last March have done so by relying on takeout business and makeshift outdoor pavilions.

The statewide rate at which residents tested positive for the coronavirus has steadily trended lower, dropping to 4.42% on Sunday from 7.94% on Jan. 4, as measured over a seven-day average, Cuomo said.