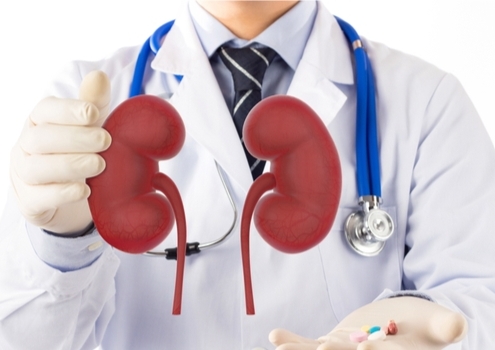 Researchers from Dana-Farber Cancer Institute are presenting an abstract of a Phase I/II trial at the ASCO 2020 Genitourinary Cancers Symposium of MK-6482 in advanced clear cell kidney cancer. The study was in 55 patients who had an average of three previous treatment regimens. The results are promising enough that a Phase III trial is planned.

In most patients with clear cell renal carcinoma, a tumor suppressor protein called Von Hippel-Lindau (VHL) does not function. Because of this, hypoxia-inducible factor (HIF) proteins accumulate inside the cancer cells, which incorrectly signals there is a shortage of oxygen. This activates blood vessel formation, stimulating tumor growth.

MK-6482 targets hypoxia-inducible factor (HIF)-2a, blocking cell growth, proliferation, and abnormal blood vessel formation. In their study, they reported a response rate of 24% across all risk categories of patients receiving the drug.

“A new drug as a single agent showing an overall response rate of 24% across all risk categories—poor, intermediate, and good and in a heavily refractory population—is quite promising,” said Toni Choueiri, first author of the abstract. Choueiri is director of the Lank Center for Genitourinary Oncology and the Jerome and Nancy Kohlberg Professor of Medicine at Harvard Medical School.

Choueiri and his mentor and collaborator William G. Kaelin Jr. shared the 2019 Nobel Prize in Medicine with two other investigators for their work on the body’s mechanism for sensing oxygen levels and switching on genes that allow the body to adjust to a shortage of oxygen.

The median duration of response hasn’t been reached: 81% of patients had an estimated response of six months or more and 16 patients continued received treatment past 12 months. The median progression-free response was 11 months.

The drug was well-tolerated with a favorable safety profile. It showed promising single-agent activity.

Funding for the research was provided by Merck Sharp & Dohme, a subsidiary of Merck & Co. Peloton Therapeutics is the trial sponsor.

Clear cell renal cell carcinoma (CCRCC) is usually characterized by malignant epithelial cells with clear cytoplasm and a compact-nested growth pattern mixed with intricate, arborizing vasculature. According to Medscape, the incidence of RCC has been rising for the last thirty years in Europe and the U.S., especially in the proportion of small, asymptomatic cancers detected incidentally by way of abdominal imaging. Higher rates are seen in men than women and for black versus white Americans.

CCRCC is typically diagnosed at the average age of 60-64 years, but 7% of sporadic CRCC is diagnosed in people younger than 40 years, with rare cases seen in patients 14-18 years of age without any family history of the disease. The most common risk factors are smoking, obesity and hypertension.