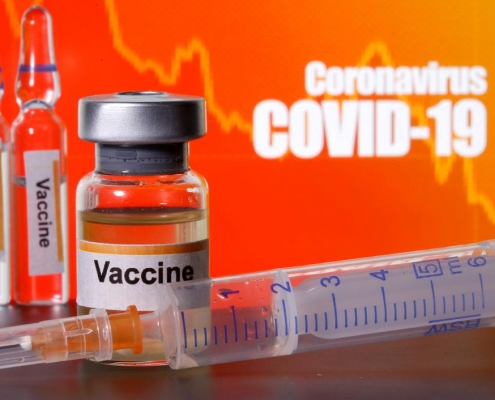 Decades of work, and half a dose of fortune, drove Oxford vaccine success

LONDON/FRANKFURT (Reuters) – It took Oxford University’s brightest minds decades of work to give them the expertise to develop a COVID-19 vaccine. In the end, it was a momentary error – and a dose of good fortune – that carried them over the line.

The Oxford vaccinologists were exhilarated on Monday when drugmaker AstraZeneca, with whom they developed the shot, announced that it could be around 90% effective, citing data from late-stage trials.

“It can only happen if extraordinary support is provided,” Adrian Hill, director of Oxford University’s Jenner Institute which developed the shot, told Reuters. “We had pretty well the whole institute in Oxford working on this vaccine.”

While skill and hard work drove development, AstraZeneca said it was a minor mistake that made the team realise how they could significantly boost the shot’s success rate, to as much as 90% from around 60%: by administering a half dose, followed by a full dose a month later.

“The reason we had the half dose is serendipity,” Mene Pangalos, head of AstraZeneca’s non-oncology research and development, told Reuters.

The plan was for trial participants in Britain to receive two full doses, but researchers were perplexed when they noticed that side effects, such as fatigue, headaches or arm aches were milder than expected, Pangalos said.

“So we went back and checked … and we found out that they had underpredicted the dose of the vaccine by half.”

He said the team nonetheless decided to press ahead with that half dose group, and to administer the second, full dose booster shot at the scheduled time.

The results showed the vaccine was 90% effective among this group, while a larger group who had received two full doses produced an efficacy read-out of 62%, leading to an overall efficacy of 70% across both dosing patterns, Pangalos said.

“That, in essence, is how we stumbled upon doing half dose-full dose (group),” he told Reuters. “Yes, it was a mistake.”

The vaccine uses a harmless adenovirus to deliver genetic material that tricks the human body to produce proteins known as antigens that are normally found on the coronavirus surface, helping the immune system develop an arsenal against infection.

Pangalos said more analysis was needed to explain why an initial lower dose bolstered protection. One possible explanation was that lower antigen levels to begin with triggered an overall better immune system build-up, he added.

Even though good fortune played its part, the development of what Oxford scientists hailed as “a vaccine for the world” was built upon 30 years of testing and tweaking of methods.

The adenovirus “viral vector” platform that their candidate uses has been around since 1991, said Hill of the university’s Jenner Institute.

He had been working with Sarah Gilbert, another vaccinologist, to fine-tune the technology. This has involved using a chimpanzee cold virus as the vector to deliver the instructions, in trials with diseases such as flu, MERS and Ebola over the last decade. The hope was that it would one day prove its potential against one or more such deadly diseases.

FILE PHOTO: AstraZeneca’s logo is reflected in a drop on a syringe needle in this illustration taken November 9, 2020. REUTERS/Dado Ruvic/Illustration

The university then offered a million pounds to underwrite the research until more funding came on board, Richardson told reporters, which duly arrived when the government and AstraZeneca became involved in May.

The unprecedented urgency and resources given to Oxford to prove the platform’s effectiveness against COVID-19 meant it leap-frogged the vaccines against those other pathogens, which are still in early-stage trials.

Gilbert said the experience with MERS, or Middle East Respiratory Syndrome, which is caused by a different type of coronavirus, was especially instructive.

“It showed us that we could make a vaccine with this technology that would induce good immune responses against the coronavirus spike protein,” she told reporters.

“We’d also been thinking about how to go really quickly when a new pathogen arises and we need to make a new vaccine. We’d done some work preparing for that.”

Andrew Pollard, head of the Oxford Vaccine Group and a professor who has spent two decades running clinical trials, said this experience gave him confidence in the prospects for Oxford’s new vaccine, known initially as ChAdOx1 nCoV-19.

“I think we knew right from the beginning of the year that if we could go through this development, we may well have something which can make a difference,” Pollard told Reuters.

But there was an issue. Limited interest in Oxford’s vaccines for other pathogens before this year meant they didn’t have the funding to prove the platform’s efficacy: until now.

“You either need a massive amount of money, or a pandemic to bring in that resource, and it’s tremendous that we’ve had this opportunity to validate that chimpanzee adenovirus technology for this coronavirus,” Hill said.

“If you’d said to me a year ago that in 2020 anybody would make a vaccine for a global pandemic – and in months rather than years – I would have thought that was hugely challenging.”

Pollard said that while speed of the COVID-19 vaccine’s development was in some ways extraordinary, 2020 had “been a very long year” since the team started work on the vaccine in January.

That culminated this past weekend, Pollard said, in having “an enormous mountain to climb to pull all of the information together” to be able to issue Monday’s data release showing the vaccine can be up to 90% effective.

“The last few weeks have been pretty exhausting. The feeling is absolutely one of extreme fatigue and tiredness at this point,” he told Reuters, speaking before he briefed the office of British Prime Minister Boris Johnson on the findings.

“If the results have not met those regulatory requirements, they would have told us just to carry on with the trial. So it was a great relief.”

Reporting and writing by Kate Kelland and Alistair Smout in London, and Ludwig Burger in Frankfurt; Editing by Pravin Char