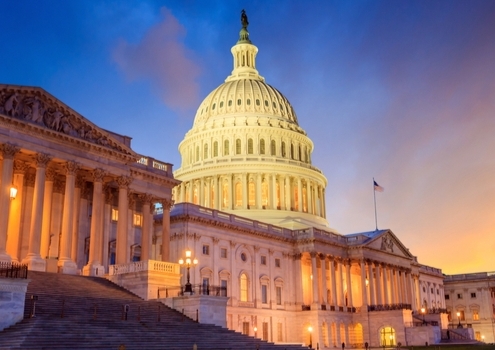 Chants of “H.R. 3” broke out in the House of Representatives chamber during Tuesday night’s State of the Union Address as Democratic lawmakers urged action on the bill passed late last year that could impact the price of prescription medications paid for by government-funded health programs.

The impromptu chant began after comments made by President Trump who urged lawmakers to send him a bill that would lower prescription drug prices – something he has pushed for since before his 2016 electoral win.

“I am calling for bipartisan legislation that achieves the goal of dramatically lowering prescription drug prices,” Trump said during the State of the Union address. “Get a bill to my desk, and I will sign it into law without delay.”

The Democratic chant was referencing House Resolution 3, the “Elijah E. Cummings Lower Drug Costs Now Act,” which was passed on a partisan vote in December. Since H.R. 3 was passed, it has languished in the Senate as the upper chamber of Congress has done nothing with the bill.

H.R. 3 will give the United States the ability to negotiate lower prices on the high-priced drugs each year. Current rules prohibit the government from negotiating the price of drugs. The plan calls for the government to negotiate the prices of up to 250 of the most expensive drugs covered by Medicare through an international pricing index in order to bring the prices of drugs covered by government programs in line with those prices paid by other countries. Additionally, the plan places stiff penalties on the companies of up to 65% of the gross sales of the drug in question. That penalty will increase by 10% each quarter that the company fails to comply with the agreement.

H.R. 3 has been widely opposed by the White House, as well as the pharmaceutical industry. Industry insiders have argued that the pricing plan would ultimately reduce the amount of capital available for partnerships and licensing agreements, particularly those agreements with small companies. The Pharmaceutical Research and Manufacturers of America (PhRMA), a national trade association for the industry, has been staunchly opposed to the plan championed by House Speaker Nancy Pelosi. In November, a PhRMA analysis showed that the Speaker’s plan would result in at least 56 fewer new medicines for patients over the next 10 years. The Trump administration, which has supported the idea of the government negotiating drug prices, said the Pelosi plan would lead to a loss of 100 drugs entering the U.S. market over the next decade. Additionally, citing the Executive Branch’s Council of Economic Advisers, the White House said the loss of those drugs would reduce Americans’ average life expectancy by about four months.

Democrats are urging the president and the Senate to take action on their bill, but the White House is looking more closely for a bill to come out of the Republican lead Senate, particularly at one helmed by Sen. Chuck Grassley of Iowa. That bill, which passed out of the Senate Finance Committee at the end of last year, would cap what Medicare patients pay for prescription drugs at $3,100 per year. That bill though has also not seen much traction in the early parts of 2020, in part due to the impeachment proceedings that will conclude this week in the Senate. It is likely the bill could be taken up and sent to the House of Representatives before the presidential election in November.

A poll by the Kaiser Family Foundation survey showed that 54% of Americans disapprove of how Trump has handled the drug-cost issue. Also, as STAT News reported this morning, a poll sponsored by the left-leaning group Protect Our Care showed disapproval for Trump’s drug pricing record in key presidential battleground states.

How to Approach Life Sciences Fundraising
Scroll to top