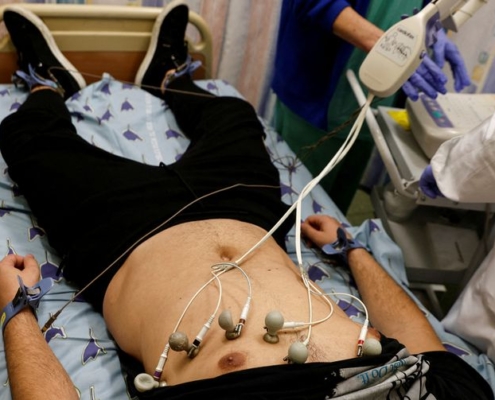 By Jennifer Rigby and Julie Steenhuysen

(Reuters) – After producing vaccines and treatments for acute COVID-19 in record time, researchers and drugmakers are turning to finding a cure for long COVID, a more elusive target marked by hundreds of different symptoms afflicting millions of people.

Leading drugmakers, including those who have launched antiviral pills and monoclonal antibodies for COVID-19, are having early discussions with researchers about how to target the disease, five scientists in the United States and UK told Reuters.

Companies including GlaxoSmithKline (GSK.L), Vir Biotechnology (VIR.O) and Humanigen (HGEN.O) confirmed they had spoken to researchers on trials using their current treatments against long COVID. Others including Pfizer (PFE.N) and Roche (ROG.S) said they are interested but would not elaborate on plans.

Researchers, biotech companies and public health experts say major pharmaceutical companies are integral to getting a proven treatment for the disease, which currently afflicts more than 100 million people, according to the World Health Organization.

“When you look at the numbers for heart failure, for diabetes, etc, that is the ballpark we are talking about,” said Amitava Banerjee, a leading researcher on a long COVID trial.

Long COVID, with some 200 reported afflictions that include fatigue, chest pain and brain fog, is defined by symptoms that last longer than 3 months. It sidelines people who have had both mild and severe COVID-19, including children. In the United States, it is estimated to have affected 1-in-7 working age adults.

Sandi Zack, 53, a former elementary school teacher from the Atlanta area who can no longer work, described symptoms including extreme fatigue, dizziness, pain and heart palpitations since contracting COVID in December 2020.

She has sought help from a range of specialists and tried a variety of drugs to ease her symptoms including steroids and the antidepressant fluvoxamine.

“We’re all still out here,” she said. “Hoping, and waiting.”

There are fewer than 20 clinical trials underway testing drugs, a handful of which have moved beyond early stages, according to interviews with more than a dozen independent and government-backed scientists and a Reuters review of a global clinical trials database.

Scientists hope their research will uncover the causes of long COVID, a major hurdle in finding targets for new drugs or identifying existing medicines that may work as treatments.

“We are getting to the stage where we are getting traction, and for people suffering, we are getting treatments tested,” said David Strain, a University of Exeter Medical School lecturer whose research has informed which treatments will be tested in a major British trial. “Hopefully we will have things we can we offer them to get their lives back to normal in the near future.”

Big pharmaceutical companies are looking for disease-specific biomarkers that would allow them to assess the value of tested medicines, experts say.

“What they’re struggling with is a case definition for long COVID,” said Dr. Amy Proal, an expert in post-viral diseases at the PolyBio Research Foundation in Mercer Island, Washington. She said she has held confidential meetings with two venture capital groups and one major pharmaceutical company.

Possible underlying causes researchers are studying include damage from the original infection, lingering reservoirs of virus in the body, an autoimmune response, in which the immune system attacks its own cells, and a dysregulated immune response causing excess inflammation that damages small blood vessels or nerves. It could be a combination of those or other factors, they say.

SEARCHING FOR A CURE AND FUNDING

They include antihistamines loratadine and famotidine, the gout and heart inflammation treatment colchichine – all available as generics – and Johnson & Johnson’s (JNJ.N) blood clot preventer Xarelto (rivaroxaban).

All have data from preliminary studies in people suggesting they could work against some of the possible disease targets for long COVID, such as inflammation and blood clots.

Banerjee, lead researcher on that trial, said the drugs will target several potential underlying mechanisms of long COVID while seeking to understand more about them.

“It’s challenging, because we’re going for a hazy target,” he said in a phone interview. “People on the industry side are trying to figure it out too.”

U.S-based Axcella Therapeutics is working with the University of Oxford in the UK on a drug developed for nonalcoholic steathohepatitis (NASH), a liver disease marked by dysregulated metabolism, inflammation and scarring.

In long COVID, the hope is the drug will restore the normal function of mitochondria – the energy factories of cells. Poorly functioning mitochondria may explain the crushing long-term fatigue so many patients experience.

As lead researcher Dr. Betty Raman put it, if COVID damaged the battery, the drug aims to restore that battery, so cells can perform their normal functions without using up too much energy.

The drug works by dissolving certain RNA in the blood that has been linked with increased inflammation in patients with autoimmune diseases such as Lupus and Sjogren’s syndrome, said Dr. James Andrews, a rheumatologist at the University of Washington who is leading the trial.

Scientists who believe the root cause of long COVID could be lingering virus are keen to test whether existing COVID-19 treatments or vaccines could have an impact.

Moderna (MRNA.O) is donating its vaccine for early trials in the UK testing whether it can help kickstart the immune system and ease long COVID symptoms, the company said in an emailed statement.

Funding has been a struggle for some companies. 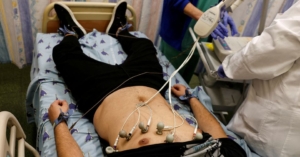 Berlin Cures Holding AG, a German biotech, secured only enough money for the first stage of testing of its autoimmune drug – previously used for heart failure – that has shown promise in a handful of patients when used experimentally.

“People call us and they cry on the phone,” Chief Operating Officer Peter Goettel told Reuters. “Some people want to sell their house to give us donations, just to get a shot.”

Reporting by Julie Steenhuysen in Chicago and Jennifer Rigby in London; Editing by Caroline Humer and Bill Berkrot