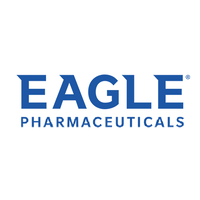 ‘WOODCLIFF LAKE, N.J.–(BUSINESS WIRE)–Eagle Pharmaceuticals, Inc. (Nasdaq: EGRX) (“Eagle”) today announced that Eagle and the University of Pennsylvania (“Penn”) have agreed on terms of a new exclusive worldwide license agreement for the development of dantrolene sodium for the potential treatment of people living with Alzheimer’s disease, including an agreement to fund additional research and provisions regarding commercialization of products developed under the license.

“Our collaboration with University of Pennsylvania builds on Eagle’s strategy to develop and commercialize therapies for critical care and disorders that have significant unmet patient needs, such as Alzheimer’s disease, the most common form of dementia,” stated Scott Tarriff, Chief Executive Officer of Eagle Pharmaceuticals. “Dantrolene sodium’s potential for use in treating Alzheimer’s patients represents novel thinking backed by years of proprietary Eagle research. Pre-clinical work around this has proven positive thus far and builds on Eagle’s years of insight gained in multiple clinical and pre-clinical studies on dantrolene sodium.”

In July at the 2019 Alzheimer’s Association International Conference, a proof-of-concept preclinical study conducted at Penn, with Eagle’s participation, documented that intranasal administration of dantrolene sodium provided therapeutic effects on memory and cognition in a mouse model of Alzheimer’s.

“We are encouraged by the preliminary work we have done together and the potential of dantrolene as a first-in-class treatment option for this devastating disease,” said Huafeng Wei, MD, Ph.D., Associate Professor of the Department of Anesthesiology and Critical Care and Principal Investigator for the animal studies at University of Pennsylvania.

Eagle’s proprietary research continues to yield insights into how dantrolene sodium plays a role in restoring intracellular calcium regulation. Eagle believes that the homeostatic balance of calcium inside cells is essential for the proper function of the nervous system. Eagle’s extensive experience with dantrolene suggests that changes in intracellular calcium levels or calcium signaling, which involve complex cellular pathways, may be involved in neurological pathologies and may lead to neurodegeneration and neuron death.

About 50 million people have dementia globally, of whom 60 to 70 percent have Alzheimer’s disease, according to the World Health Organization. In the US, 5.8 million people are living with Alzheimer’s, which has no cure and is the sixth leading cause of death.

Eagle is a pharmaceutical company focused on developing and commercializing innovative and differentiated injectable products that address the shortcomings, as identified by physicians, pharmacists and other stakeholders, of existing commercially successful injectable products. Additional information is available on the Company’s website at www.eagleus.com.