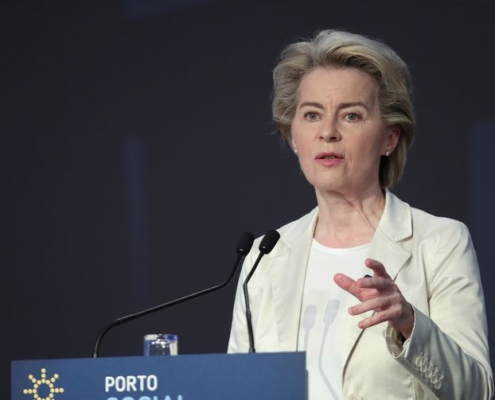 EU calls on U.S. and others to export their vaccines

(Reuters) – The European Commission called on Friday on the United States and other major COVID-19 vaccine producers to export what they make as the European Union does, rather than talk about waiving intellectual property rights to the shots.

Commission head Ursula von der Leyen told a news conference on the sidelines of a summit of EU leaders that discussions on the waiver would not produce a single dose of COVID-19 vaccine in the short- to medium-term.

“The European Union is the only continental or democratic region of this world that is exporting at large scale,” von der Leyen said. 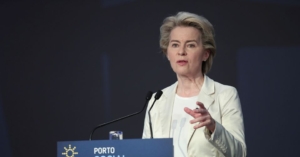 European Commission President Ursula von der Leyen speaks during the opening ceremony of an EU summit at the Alfandega do Porto Congress Center in Porto, Portugal May 7, 2021. Luis Vieira/Pool via REUTERS

She said about 50% of European-produced coronavirus vaccine is exported to almost 90 countries, including those in the World Health Organization-backed COVAX program.

“And we invite all those who engage in the debate of a waiver for IP rights also to join us to commit to be willing to export a large share of what is being produced in that region,” she said.

Only higher production, removing exports barriers and the sharing of already-ordered vaccines could immediately help fight the pandemic quickly, she said.

“So what is necessary in the short term and the medium term: First of all vaccine sharing. Secondly export of vaccines that are being produced. And the third is investment in the increasing of the capacity to manufacture vaccines.”

Von der Leyen said the European Union had started its vaccine sharing mechanism, citing delivery of 615,000 doses to the Western Balkans as an example.