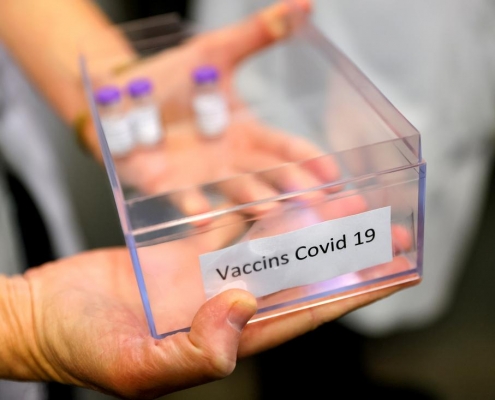 BRUSSELS/FRANKFURT (Reuters) – The EU campaign to vaccinate Europeans against COVID-19 has got off to an uneven start in what will be a marathon effort to administer shots to enough of the bloc’s 450 million people to defeat the viral pandemic.

The vaccination drive kicked off at the weekend, with health workers and residents of care homes across the bloc among the first to get the Pfizer and BioNTech shots, which must be kept at ultra-cold temperatures. 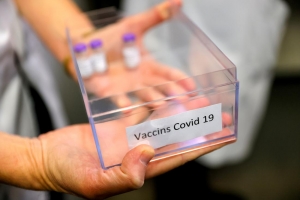 Doses of the Pfizer-BioNTech coronavirus disease (COVID-19) vaccine are prepared at the Rene-Muret hospital in Sevran, on the outskirts of Paris, France, December 27, 2020. Thomas Samson/Pool via REUTERS

There were initial hiccups: officials in southern Germany said on Monday they would dump around 1,000 doses after finding they had not been properly chilled. Temperature controls also caused a delivery delay in Spain.

In Italy, meanwhile, some politicians complained that Germany – the EU’s largest member state and home to BioNTech – may be getting more than its fair share of shots.

The teething troubles are an early test of the EU’s decision to procure vaccines jointly, which has left the bloc lagging the United States, Britain, Israel and Switzerland in approving and administering the first vaccines.

The EU is due to receive its first 12.5 million doses of the Pfizer vaccine by New Year’s Day, with distribution of 200 million doses across its 27 member countries to be completed by next September. The vaccine course requires two doses.

Talks are under way to agree on the delivery of an optional further 100 million doses under the contract sealed with the two companies, the EU says.

The EU has sealed agreements with other drugmakers besides Pfizer, including Moderna and AstraZeneca, for more than two billion doses in total. It wants to inoculate all adults by the end of next year.

As well as being the first COVID-19 vaccine to be delivered across the EU, the Pfizer shot is also particularly tricky to handle. For long-term storage it needs to be deep frozen at around minus 70 Celsius (minus 94 Fahrenheit). It can be defrosted for a few days before being used, but even then must be kept chilled.

In southern Germany, officials said they would not use some shots after temperature trackers showed they may not have been kept cold enough.

“There were doubts as to whether the cold chain was maintained at all times,” said Christian Meissner, district administrator in the Bavarian town of Lichtenfels. “BioNTech said that the vaccine was probably okay, but ‘probably okay’ is not enough,” he told Reuters TV.

In Spain, the delivery of a new batch from Pfizer was held up by a day to Tuesday due to an issue with temperature controls that has now been resolved, Health Minister Salvador Illa said.

Maria Asuncion Ojeda, a resident at Madrid’s Ballesol Parque Almansa nursing home, was still delighted to be an early recipient of the Pfizer vaccine.

“I wanted to do it because it’s the only way we can solve this problem,” the 87-year-old said on Monday, a day after Spain began vaccinating care-home residents and their staff.

The EU is distributing the jointly procured vaccines on a pro-rata basis to the 27 member states based on their populations, while European countries have also made their own deals to buy extra doses separately.

In Italy, some politicians said Germany appeared to be getting more than its fair share, at least during the highly symbolic initial rollout.

“The accounts don’t add up,” Italian virologist Roberto Burioni said on Twitter, pointing to reports in Germany that first-day deliveries had totalled 150,000 doses while other EU countries got just 10,000.

An official familiar with vaccine distribution in Germany said that each of the 16 German federal states had received 10,000 doses of the Pfizer vaccine ahead of the weekend start of the inoculation drive.

An Italian journalist asked about the supplies at a German government news conference. An official from the German health ministry replied that Berlin had signed a separate deal for 30 million extra doses of the Pfizer vaccine.

(This story corrects Celsius to Fahrenheit conversion in paragraph 9)