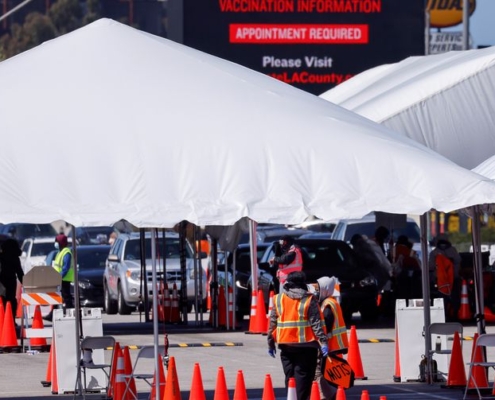 By Julie Steenhuysen and Marisa Taylor

(Reuters) – The Biden administration wants to expand a federal COVID-19 tracking system created during the pandemic to provide a more detailed view of how respiratory and other infectious diseases are affecting patients and hospital resources, according to a draft of proposed rules reviewed by Reuters.

The plan would build upon a hospital data collection system designed by the Department of Health and Human Services (HHS) under the Trump administration. Management of the program was transferred last month to HHS’s lead public health agency, the U.S. Centers for Disease Control and Prevention (CDC).

The change comes amid criticism over the CDC’s shifting public health guidance during the pandemic and its ability to collect and analyze COVID data in a timely and transparent way.

Authorization for the current hospital data tracking program is due to expire once the government lifts the national state of pandemic emergency.

The proposed plan would ensure it remains in place long term and add new requirements of the nearly 6,200 participating hospitals, such as providing data on the number of patients with flu-like illnesses and other diseases with pandemic potential in addition to COVID and influenza.

Such reporting would be a condition of hospitals’ participation in the federal Medicare and Medicaid health insurance programs for older and poor Americans.

The hospitals would be required to provide data – without names – on patients’ vaccination status, pre-existing conditions, age, ethnicity and other details that would shed light on health outcomes among various populations.

Beth Blauer, who runs the Pandemic Data Initiative at Johns Hopkins University, called the proposed plan a “big shift” and “a reconstitution of trust in the CDC.”

“There’s concern that when the pandemic emergency lifts, the data flow will dry up,” she said. “This is what they (CDC) were designed to do.”

The rules are being reviewed by the White House Office of Management and Budget, which is expected to publish them to allow for public comment before they are finalized. CDC officials declined to comment on the proposed data expansion.

However, the proposed changes have raised concerns among some administration officials.

“There are just no signs that any thought has been put into how the CDC can raise its game enough to allow for real-time sharing of information that informs the public beyond just the federal government,” said a senior Biden administration official familiar with the debate over the proposal who was not authorized to speak about it.

The CDC said in a statement the agency is continuing to partner with HHS “to ensure the data are available and accessible.”

The HHS Protect system was created in 2020 under Dr. Deborah Birx, the coronavirus task force coordinator for the Trump White House, at a cost of tens of millions of dollars. It quickly became an effective clearinghouse for daily hospital data on coronavirus infections and deaths.

At the time, CDC officials conceded that the agency could not rapidly adapt its National Healthcare Safety Network (NHSN) reporting system to collect additional hospital and medical inventory data needed to inform pandemic decision-making. As a result, CDC recommended HHS develop a new system for this purpose, according to documents reviewed by Reuters.

The CDC said the decision was based on the lengthy regulatory review that would have been required to change its own reporting system, among other factors.

“By no means was this an acknowledgement of the inadequacy of NHSN,” Sherri Berger, CDC chief of staff, said in an email.

More recently, the CDC has had several high-profile setbacks on its data reporting, including overestimating the benefit of COVID booster shots for younger people and failing to track and publish data on breakthrough infections among the vaccinated in a timely way.

Blauer and other experts said the CDC was the appropriate agency to oversee the data program. Some noted that it has received an additional $500 million in funds under the American Rescue Plan to further modernize its data collection.

“What we really need to do,” said Dr. Celine Gounder, a member of the Biden Administration’s transition team, “is hold them accountable for following through on that.”

Reporting by Julie Steenhuysen in Chicago and Marisa Taylor in Washington; Editing by Michele Gershberg and Bill Berkrot