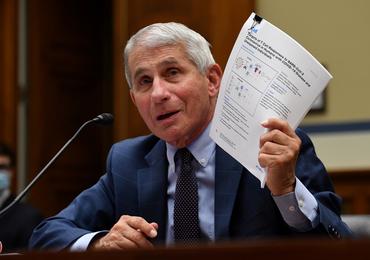 Fauci sees U.S. gaining control over pandemic by next autumn

FILE PHOTO: Dr. Anthony Fauci, director of the National Institute of Allergy and Infectious Diseases, speaks with Health and Human Services Secretary Alex Azar before receiving his first dose of the new Moderna COVID-19 vaccine at the National Institutes of Health, in Bethesda, U.S., December 22, 2020. Patrick Semansky/Pool via REUTERS

Fauci made his remarks during an online discussion of the pandemic with California Governor Gavin Newsom, who announced at the outset that a more infectious coronavirus variant originally found in Britain has been detected in his state, a day after the first known U.S. case was documented in Colorado.

Newsom said the coronavirus variant B.1.1.7 had been confirmed earlier in the day in a Southern California patient. He did not provide further details. But the California Department of Public Health said in statement later that the person, a San Diego County patient, has no known travel history, suggesting the variant is spreading within the community.

Fauci said he was “not surprised,” adding that additional cases of the variant would likely surface around the country and that the mutating nature of such viruses is normal.

“It appears that this particular mutation does make the virus better at transmitting from one person to another,” he said. However, individuals infected with earlier forms of SARS-CoV-2 “don’t seem to get re-infected by this,” meaning that any immunity already acquired “is protective against this particular strain,” Fauci added.

He also stressed that the so-called UK variant is believed to be no more severe in the illness it causes, and that newly approved COVID-19 vaccines will prove just as effective against it as against earlier known forms of the virus.

The same is believed to be true for a second new variant, also more infectious and first reported in South Africa, according to the U.S. Centers for Disease Control and Prevention (CDC).

Still, the emergence of a more highly transmissible variant could make a swift rollout of immunizations all the more critical.

President-elect Joe Biden warned on Tuesday it could take years to inoculate most Americans given an initial vaccine distribution rate that has lagged behind the promises of the Trump administration. He called on Congress to approve greater funding for the endeavor.

‘WE’RE GOING TO CATCH UP’

Fauci, director of the National Institute of Allergy and Infectious Diseases, said on Wednesday he was confident that early glitches in distribution of the vaccine will be overcome. 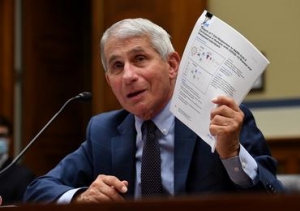 “As we get into January, the feeling is that we’re going to gain momentum to be able to catch up,” he told Newsom, saying he expected immunizations to become widely available to the general public on demand, by April.

Assuming that the broad vaccination campaign progresses as it should through May, June and July, “By the time we get to the early fall, we will have enough good herd immunity to be able to really get back to some strong semblance of normality – schools, theaters, sports events, restaurants,” Fauci said.

Nevertheless, the prospect of fighting a more contagious form of the virus comes as the pandemic has raged largely out of control across much of the United States for weeks. California, the most populous state with 40 million, has become the latest flashpoint, as hospitals in and around Los Angeles report intensive care units filled to capacity.

Medical experts attribute a worsening of the pandemic in recent weeks to the arrival of colder weather and the failure of many Americans to abide by public health warnings to avoid social gatherings and unnecessary travel over the year-end holiday season.

The result has been an alarming surge of infections and hospitalizations that have strained healthcare systems to their limits, and a steadily mounting U.S. death toll, surpassing 338,000 lives lost nationwide to date.

In addition to upending daily social life in America, the pandemic has stifled the economy, idling millions of workers at numbers not seen since the Great Depression of the 1930s.

The first U.S. case of the UK variant was announced by Colorado Governor Jared Polis on Tuesday. At a news conference on Wednesday, Polis described the patient infected as a National Guard soldier in his 20s who had been assigned to help deal with a COVID outbreak at a nursing home in Simla, Colorado, on the outskirts of the Denver metropolitan area.

The patient, isolating and recuperating at home, has no recent travel history, which Dr. Henry Walke, incident manager for the CDC’s COVID response, said is a sign of person-to-person transmission of the variant within the United States.

The director of Colorado’s Public Health and Environment Department told reporters that a second member of the National Guard may also have contracted the UK variant, though final laboratory confirmation was still being awaited.

The new variant has been detected in several European countries, as well as in Canada, Australia, India, South Korea and Japan, among others.

The U.S. government on Monday began requiring all airline passengers arriving from Britain – including U.S. citizens – to test negative for COVID-19 within 72 hours of departure.

The government may expand coronavirus testing requirements for international air travelers beyond Britain as early as next week, sources briefed on the matter told Reuters on Wednesday.