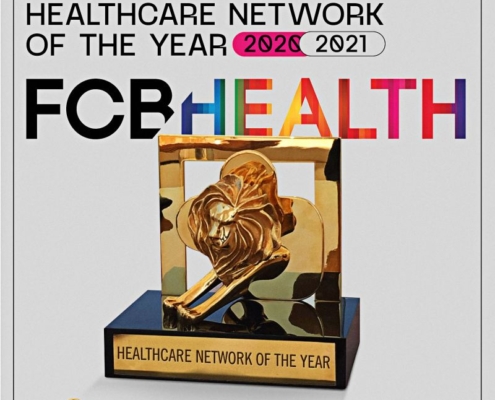 New York, NY, June 21, 2021 (updated June 25) – The FCB Health Network was crowned Healthcare Network of the Year at the 2021 Cannes Lions International Festival of Creativity, with its AREA 23 taking the coveted Healthcare Agency of the Year award. 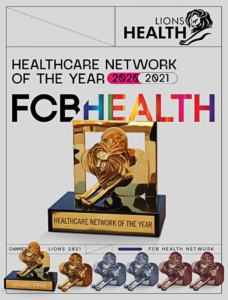 This is the second time the FCB Health Network has secured this prestigious recognition, after the first win in 2018. As of Monday morning, the Network had hauled a total of eleven Lions on the Festival’s opening day, seven of them falling within the Lions Health competition. The wins include: the Pharma Grand Prix, one Gold, four Silver, and five Bronze Lions. (Editor’s update: FCB Health Network won a total of 21 Lions throughout the entire festival)

These accolades build on the FCB Health Network’s winning streak in the midst of a challenging year for the industry: The Network recently dominated at the 32nd Annual Manny Awards, taking 10 MANNYs, including “Most Admired Agency,” “Agency of the Year – Category I” and “Most Creative Agency” for AREA 23 (the 3rd time the agency has taken home the coveted trifecta). It was the most awarded company at the 2020 DTC National Advertising Awards, with 11 wins, including six Golds. And, the Network shone brightly at the 2020 Medical Marketing & Media (MM&M) Awards, taking home 10 honors across its FCB Health New York and AREA 23 agencies, including Silver for Large Agency of the Year for FCB Health New York. Capping it off, FCB Health New York and FCBCURE were named to MM+M’’s 2020 “Best Places to Work” list – marking the third consecutive year FCB Health New York received this honor.

Commenting on the Network’s success, CEO Dana Maiman – who was recently named Ad Age Agency Executive of the Year – said, “I couldn’t be prouder of the FCB Health Network and our agencies. Despite the unprecedented circumstances of this past year, our focus remained on doing what’s right for our clients, their brands, and our people. Through that lens, we continued challenging ourselves to break new ground and create work that leaves the world better than we found it. These accolades are a testament to our ‘Never Finished’ philosophy. It’s an incredible honor to create truly meaningful work with our clients, and to have that work and impact recognized by the industry.” 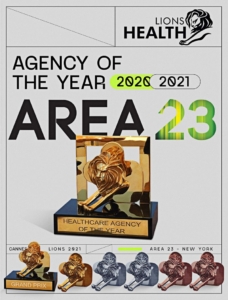 Notably, FCB Health Network’s AREA 23 was crowned Healthcare Agency of the Year for the second time after capturing the honor in 2017. This honor was driven by strong performance across campaigns for five clients, which included the rarely awarded Grand Prix, for their SICK BEATS innovation created for Woojer. (Editor’s update: AREA 23 won 21 total Cannes Lions, including 11 specifically for SICK BEATS)

Tim Hawkey, Chief Creative Officer of AREA 23 said, “This is incredible. To power through a very tough 2020 with a strong cannon of work, and to continue that into 2021, I am so proud of the AREA 23 teams that have continued to push for breakthrough creativity despite difficult circumstances. We are so lucky to work with clients who are willing to run with great, boundary-breaking ideas and aren’t afraid to try something that hasn’t been done before.”