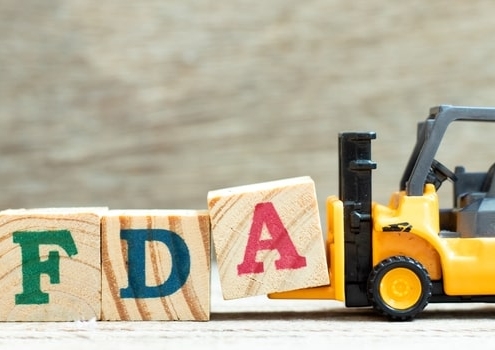 The U.S. Food and Drug Administration (FDA) has a busy end of November planned, with numerous PDUFA dates to address. Here’s a look at the upcoming week.

Blueprint Medicines had a target action date of November 23, 2020 for pralsetinib for locally advanced or metastatic RET fusion-positive non-small cell lung cancer (NSCLC). The FDA approved it under the brand name Gavreto on September 4. The drug is a once-daily oral precision therapy designed for highly potent and selective targeting of oncogenic RET alterations. In addition to RET-altered NSCLC, it is being developed for RET-altered thyroid cancer and other solid tumors. The FDA granted Breakthrough Therapy Designation to the drug for RET fusion-positive NSCLC that has progressed after platinum-based chemotherapy, and RET mutation-positive MTC that requires systemic treatment and for which there are no alternative treatments.

The company has an exclusive collaboration and license deal with CStone Pharmaceuticals for development and commercialization of pralsetinib and specific other drug candidates in Mainland China, Hong Kong, Macau and Taiwan. It holds the rights for the drug in the rest of the world.

Liquidia Technologies has a target action date of November 24 for its NDA for LIQ861 for treatment of pulmonary arterial hypertension (PAH). The drug is an investigational, inhaled dry powder formulation of Treprostinil designed using Liquidia’s PRINT technology. It was engineered with the intention of improving deep-lung delivery of Treprostinil in PAH patients by means of a dry powder inhaler.

PAH is a chronic, progressive disease caused by the hardening and narrowing of the pulmonary arteries that can cause right heart failure and eventual death. Treprostinil is a synthetic analog of prostacyclin, a vasoactive mediator required for normal lung function. It is deficient in PAH patients.

The drug has been tangled up in a patent lawsuit with United Therapeutics Corporation (UTC), which markets Tyvaso (Treprostinil). On October 14, Liquidia announced the U.S. Patent Trial and Appeal Board (PTAB) had instituted inter partes review (IPR) against U.S. Patent 9,604,901 and also denied institution on 9,593,066, both owned by United Therapeutics.

At the time, Neal Fowler, Liquidia’s chief executive officer, said, “The PTAB’s decision to institute an IPR proceeding against the ‘901 patent for Tyvaso is another important step forward for Liquidia’s ongoing effort to bring LIQ861, a convenient and well tolerated treatment option, to the PAH community.”

Revance Therapeutics has a target action date of November 25 for its Biologics License Application (BLA) for DAXI to treat moderate to severe glabellar (frown) lines. DAXI was evaluated in three Phase III trials, with the median time to loss of none or mild wrinkle severity was 24 weeks and the median time to return to baseline wrinkle severity was about 28 weeks. DAXI stands for DaxibotulinumtoxinA for Injection, combining a proprietary stabilizing peptide excipient with a highly purified botulinum toxin.

At the time of acceptance in February 2020, Mark Foley, Revance’s president and chief executive officer said, “The patient experience has remained largely unchanged since botulinum toxin type A treatments were first introduced over 30 years ago. If approved, we expect that patients treated with DAXI may achieve lasting, natural-looking frown-line correction all year long with as few as two treatments.”

Rhythm Pharmaceuticals has a target action date of November 27 for its NDA for setmelanotide for treatment of POMC deficiency obesity and LEPR deficiency obesity. It was granted Priority Review. The drug is an investigational melanocortin-4 receptor (MC4R) agonist. The drug also received Rare Pediatric Disease Designation for these indications.

It can be challenging to keep up with all the indications that Merck’s checkpoint inhibitor Keytruda (pembrolizumab) has been approved for. The company had a target action date of November 28 for Keytruda with chemotherapy for patients with locally recurrent unresectable or metastatic triple-negative breast cancer (TNBC) whose tumors express PD-L1. The data was based on the Phase III KEYNOTE-355 trial.

The drug was approved for that indication on November 13. The data was built on data from the KEYNOTE-355 trial, where Keytruda with paclitaxel, paclitaxel protein-bound or gemcitabine and carboplatin significantly decreased the risk of disease progression or death by 35% in patients whose tumors express PD-L1 compared to the same chemotherapy regimens alone.