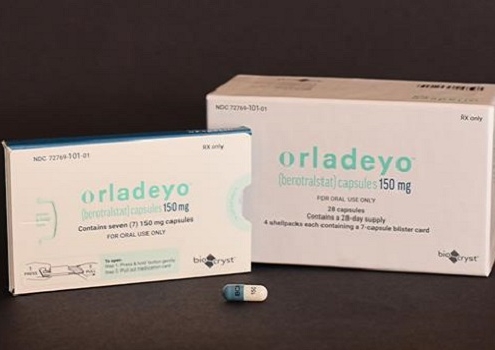 BioCryst Pharmaceuticals, Inc.announced on Thursday that the U.S. Food and Drug Administration (FDA) has approved ORLADEYO (berotralstat) for prophylaxis to prevent attacks of hereditary angioedema (HAE) in adults and young patients 12 years and older. The approval was based on data from the Phase 3 APeX-2 trial, which showed that ORLADEYO could significantly reduce attacks at the 24-week mark. The reduction was sustained through 48 weeks in the study.

“ORLADEYO offers people with HAE and their physicians the first orally administered non-steroidal option for preventing HAE attacks and represents an important and welcome step in making more treatment options available to physicians and patients,” said Anthony J. Castaldo, president and chief executive officer of the US Hereditary Angioedema Association.

“Patients and physicians acknowledge that HAE treatments can add a burden to patients’ lives.  As an oral, once-daily option, ORLADEYO can provide significant attack reduction and lessen the burden associated with injections and infusions,” said Marc Riedl, M.D., professor of medicine and clinical director, U.S. Hereditary Angioedema Association Center at the University of California, San Diego, and an investigator in the APeX-2 trial. “With this new treatment option, physicians and patients can continue to have collaborative discussions to choose the treatment that meets each patient’s needs, life circumstances and preferences.”

ORLADEYO is the first and only oral therapy that was designed to prevent attacks of HAE in adults and pediatric patients age 12 and older. In the Phase 3 trial, the product was safe and well tolerated. The most frequently reported adverse reactions were gastrointestinal related.

In October, the United Kingdom’s Medicines and Healthcare products Regulatory Agency (MHRA) granted ORLADEYO a positive scientific opinion through the Early Access to Medicines Scheme (EAMS). Under the EAMS, patients with HAE in the UK aged 12 and older can gain access to the drug for the routine prevention of recurrent attacks.

“There are many patients in the UK that don’t have a realistic option for effective HAE prophylaxis. The addition of berotralstat through the EAMS will bring a much needed option for HAE patients suffering with this debilitating disease,” said Dr. Sorena Kiani, Consultant Immunologist at Royal London Hospital, London.

The European Medicines Agency (EMA) is also reviewing the marketing authorization application (MAA) for the drug under the centralized procedure. An opinion from the Committee for Medicinal Products for Human Use is predicted to arrive within 12 months from the validation of the MAA, which was announced back on March 30 of this year.

“HAE patients around the world are waiting for an oral, once-daily therapy to prevent attacks and reduce their burden of therapy. With this decision by the MHRA, the wait for many HAE patients in the UK can end sooner,” said Jon Stonehouse, chief executive officer of BioCryst.

HAE is a potentially life-threatening, rare genetic disease characterized by episodes of acute swelling of the skin, pharynx, larynx, gastrointestinal tract, genitals and other extremities. At the moment, additional doses or dosages of ORLADEYO that surpass 150mg once daily are not recommended.