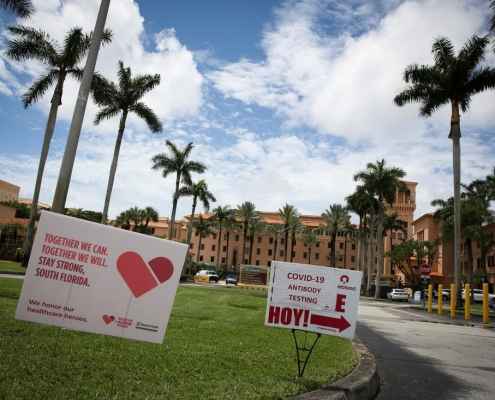 (Reuters) – Florida recorded more than 12,600 new coronavirus cases on Monday, its second-highest daily total since the outbreak began, coinciding with the state’s attempt to revive tourism and attract visitors to the recently reopened Disney World.

Florida along with Arizona, California and Texas have emerged as the new U.S. epicenters of the pandemic in recent weeks. Infections have risen rapidly in about 40 of the 50 states over the last two weeks, according to a Reuters analysis.

In the early morning, Trump retweeted accusations by a former game show host that “everyone is lying,” including the federal Centers for Disease Control and Prevention (CDC), the lead agency in the pandemic response.

“The most outrageous lies are the ones about Covid 19. Everyone is lying. The CDC, Media, Democrats, our Doctors, not all but most, that we are told to trust,” Chuck Woolery wrote Sunday night, without providing evidence.

On Sunday, Florida reported a record increase of more than 15,000 new cases of COVID-19 in 24 hours. If Florida were a country, that would rank it fourth in the world for the most new cases in a day, behind the United States, Brazil and India, according to a Reuters analysis.

The number of COVID-19 patients hospitalized in Florida is quickly rising, with over 500 new patients in the past 24 hours raising to 8,000 the number in hospitals, according to a state agency. Across Florida, 47 hospitals reported their intensive care units (ICUs) were completely full, including eight hospitals in the Miami-Dade County hot spot.

No hospital ICUs were full in Orange County, Florida, where Disney World welcomed the public on Saturday for the first time since March. Guests must wear masks, undergo temperature checks and keep physically apart.

(Graphic: Tracking the novel coronavirus in the U.S. – here)

The Republican president, seeking re-election in November, has been increasingly critical of government health officials and their guidance as a steady rise in infections threatens the easing of shutdown restrictions across the country. 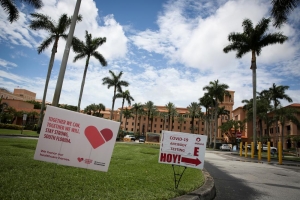 Doctors and the CDC have pleaded with the public to wear masks to limit the spread of the virus, but the issue has become politically divisive in the United States unlike many other countries that have seen far lower rates of infection and death.

Seven months into the pandemic, Trump wore a mask for the first time in public when he visited a Washington D.C.-area military medical center on Saturday. He had previously refused to wear a mask in public or ask Americans to wear face coverings, saying it was a personal choice.

(GRAPHIC: Where coronavirus cases are rising in the United States – here)