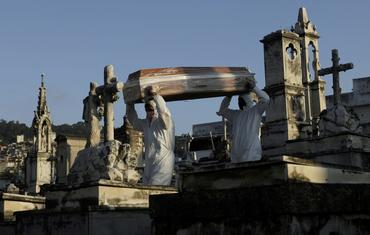 (Reuters) – The global tally of confirmed coronavirus cases hit 60 million on Wednesday, with the pace of new infections accelerating and the United States reporting record numbers of hospitalizations, according to a Reuters tally.

Officials in the United States, the worst-affected country in the world, urged Americans to stay home for the imminent Thanksgiving holiday as soaring numbers of COVID-19 patients pushed medical professionals to the brink.

The United States has reported 1 million new COVID-19 cases in less than a week, taking its total reported infections to over 12.5 million and its death toll to 260,000, according to the Reuters data based on official statements.

An analysis of the Reuters data showed the rate of new infections picking up globally. It took just 17 days to go from 50 million cases to 60 million, compared with the 21 days it took to go from 40 million to 50 million. Around 580,000 cases have been reported each day over the past week and around half of all cases since the start of the pandemic were reported over the past 70 days. (Graphic: tmsnrt.rs/366qPfc)

In Europe, 1 million new cases were recorded over just five days, for a total of more than 16 million cases, including 365,000 deaths.

Governments across Europe are struggling to impose restrictions on public life while allowing families to celebrate Christmas without further fuelling outbreaks.

FILE PHOTO: Men dressed in protective suits stand around the coffin of Kenyan doctor Daniel Alushula who died of coronavirus disease (COVID-19), during his funeral in the village of Khumusalaba, in Kakamega county, Kenya November 13, 2020. REUTERS/Baz Ratner/File Photo

While a national lockdown in England is due to end next week, Germany, Spain, and Italy have all announced restrictions over the holiday period, including limits on house guests.

The Latin American region has the highest number of reported deaths in the world, representing about 21% of all global cases and over 31% of all global deaths reported. (Graphic: tmsnrt.rs/33cHDzp)

Brazil last week joined the United States and India as the only countries to have recorded more than 6 million infections. With almost 170,000 confirmed fatalities, Brazil has the world’s second-highest death toll.

While India remains the second-worst affected country in the world with almost 9.2 million cases, it has continued to report a slowdown in new cases in recent weeks. It has reported an average of around 44,000 cases a day over the past week, well down from a peak of just under 97,900 cases in mid-September.

Asia-Pacific countries such as China, South Korea, Singapore, Australia and New Zealand had shown how rapid, local, and intrusive steps can be effective in extinguishing outbreaks.