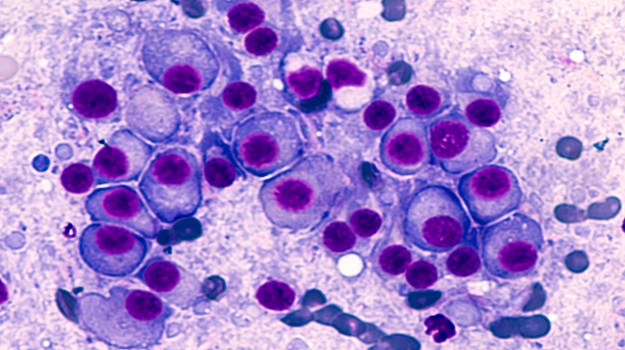 GlaxoSmithKline announced results from its pivotal DREAMM-2 Phase III trial of belantamab mafodotin in multiple myeloma (MM). The results were published in The Lancet Oncology and the company said it had submitted a Biologics License Application (BLA) to the U.S. Food and Drug Administration (FDA).

Should the drug be approved, it will go head-to-head against Johnson & Johnson and Genmab’s Darzalex. Earlier this month, J&J reported that Darzalex decreased the risk of death or cancer getting worse by 37% in multiple myeloma patients.

In the GSK trial, belantamab mafodotin showed a clinically meaningful overall response rate (ORR) of 31% with the 2.5 mg/kg dose in patients with heavily pre-treated MM. Patients had received a median of seven previous lines of treatment, were refractory to an immunomodulatory drug and a proteasome inhibitor, and were refractory and/or intolerant to an anti-CD38 antibody.

“Patients with multiple myeloma whose disease has progressed despite currently available therapy have limited options and poor outcomes,” said Hal Barron, chief scientific officer and president R&D for GSK. “Data from the DREAMM-2 study show that, if approved, belantamab mafodotin could offer an important new treatment option for these patients.”

In DEAMM-2, patients who had actively progressing MM that grew worse despite current standard of care, were randomized into two arms to receive 2.5 mg/kg or 3.4 mg/kg belantamab mafodotin every three weeks. In general, the patients in DREAMM-2 had more advanced disease and worse prognosis than those in DREAMM-1. Results in the two trials were similar. The BLA is for the 2.5 mg/kg dosage.

Of the 97 patients in the 2.5 mg/kg cohort, 31% achieved an overall response. Of that subgroup, 18 hit a very good partial response or better, with three patients with stringent complete or complete responses. Overall survival in patients achieving a response had not yet reached the mark at the six-month follow-up period.

“Each day in my practice, I see patients who would benefit from additional therapeutic options because disease has advanced and is no longer responding to available treatments,” said Sagar Lonial, chief medical officer, Winship Cancer Institute of Emory University, chair of Emory Department of Hematology and Medical Oncology and principal investigator for DREAMM-2. “In recent years, BCMA has become one of the most promising targets in multiple myeloma research.”

These latest results are the first from about 10 trials planned for the drug. The company is focused on demonstrating the drug works in earlier stages of treatment.

Axel Hoos, GSK’s oncology research and development head, told MSN, “We are pretty confident that we can actually achieve the same (response rates) if not more and eventually even beat Darzalex in some settings.”

Analysts have projected Darzalex can generate more than $4 billion in revenues in 2020.

MM is the second most common blood cancer. It is considered treatable, but not curable. Belantamab mafodotin is an immunoconjugate made up of a humanized anti-B cell maturation antigen (BCMA) monoclonal antibody linked to auristatin F, a cytotoxic agent. The linker technology is licensed from Seattle Genetics. The monoclonal antibody is engineered using POTELLIGENT Technology licensed from BioWa.