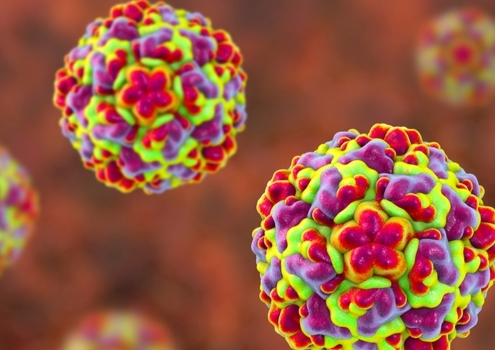 How a Common Cold Virus is Helping Fight Cancer

A recent Phase I study led by the Perlmutter Cancer Center at NYU Langone Health is one of the first to show how oncolytic viruses, viruses that infect and break down cancer cells but not normal cells, can be used to boost already approved cancer therapies.

The study treated 36 men and women with advanced melanoma, whose tumors could not be surgically removed. Patients were given a combination of cancer treatment pembrolizumab, an approved immunotherapy drug, with the experimental coxsackievirus drug V937 every few weeks for at least two years.

The combined treatment was not only well-tolerated, but also successfully shrank melanoma tumors in nearly half the patients in the trial.  The most common side effects were similar to this experienced by patients on pembrolizumab alone. 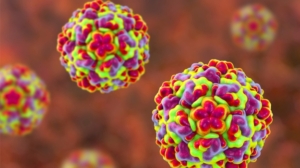 “Our initial study results are very promising and show that this oncolytic virus injection, a modified coxsackievirus, when combined with existing immunotherapy is not only safe but has the potential to work better against melanoma than immunotherapy alone,” said study senior investigator and medical oncologist Janice Mehnert, M.D.

Oncolytic viruses are becoming a hot topic in cancer treatment. Cancer cells typically are very susceptible to infection. Natural oncolytic viruses can be engineered to decrease their ability to infect healthy cells, while still delivering therapeutic payloads to tumors and boosting immune molecules after infection. The virus cells flood into the tumor and cause the cancer cells to “burst,” killing the cancer cells and releasing cancer antigens. The antigens are then able to eliminate any remaining cells nearby and, potentially, in other locations of the body.

In 2015, Amgen won FDA approval for the first viral-based cancer therapeutic. Imlygic uses a modified version of the herpes simplex virus I – the cold sore virus – also used for the treatment of advanced melanoma. At the time, a senior scientist at Ottawa Hospital Research institute said the field of virus-based therapeutics is “exploding.”

In the Perlmutter trial, eight of the 36 patients, (22%) experienced complete remission with no remaining signs of cancer.

Mehnert clarified that further testing is already underway to prove the combination is successful, before it could be considered a “standard of care” for advanced melanoma. The next phase of trials will involve cases of widespread melanoma, as well as cases that could be surgically removed if the tumor was smaller after treatment.

“Our goal is to determine if the virus turns the tumor microenvironment from ‘friendly’ to one that is ‘unfriendly,’ making the cancer cells more vulnerable to pembrolizumab,” Mehnert said.