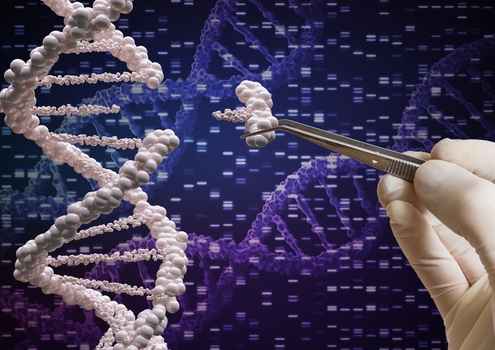 Researchers at the University of Pennsylvania and Children’s National Hospital in Washington, DC utilized a hybrid approach that combined gene therapy with gene editing to treat a rare genetic disease in animal models, making it convert into a milder, more treatable form of the disease. The disease was ornithine transcarbamylase deficiency (OTCD), which is the most common type of a family of illnesses called urea cycle disorders.

Urea cycle disorders affect about 1 in 30,000 individuals. It causes problems in how the body metabolizes proteins in food. Normally, proteins are broken into individual amino acids. The body then recycles those amino acids to create new proteins for the body to use. Extra proteins are metabolized for energy, which requires a chemical category called amines to be removed, which are converted into ammonia. Ammonia is toxic to cells. In healthy people, urea cycle enzymes from the liver convert ammonia into urea, which is harmlessly excreted in urine.

When people have urea cycle disorders, ammonia builds up, causing vomiting and lethargy. If untreated, it can cause coma and death.

The various urea cycle disorders are caused by various genetic mutations. The researchers, led by James M. Wilson at the University of Pennsylvania and Mark L. Batshaw at Children’s National, originally attempted a typical form of gene therapy in animal models, inserting a properly functioning version of the OTC gene into a virus that carries the code for the missing enzyme, ornithine transcarbamylase.

This approach worked in older animals but did not last long in newborn animals because of rapid liver growth. CRISPR/Cas9 gene editing, on the other hand, can be used to modify the genes. Alone, this is a problem for OTCD because there are more than 400 different known mutations that cause it.

For their new approach, which they described in the journal Science Advances, they developed a viral vector that carried an enzyme that creates a targeted break in DNA. This step is typical in standard gene editing. But, instead of correcting the mistake, a second vector that carried a copy of the correct OTC gene sequence was used simultaneously.

In their experimental animal models of newborn animals, the gene integrated into cells and spread in patches in the animals’ livers as they grew. They produced more and more of the necessary detoxifying enzyme as they grew. They then tested nitrogen loads on the animals, and the ones who had been treated with the combined strategy had approximately 60% lower ammonia levels in their blood compared to untreated animals. All of the treated animals survived a seven-day test, while only a quarter of the untreated animals survived.

“Theoretically, this could be a curative approach for OTCD,” Batshaw said. “And if it worked for that, we could create similar templates to treat other related disorders.”

Currently, treatment for the disease includes a very low protein diet, drugs that scavenge nitrogen from the blood or a liver transplant in the most serious cases. “Through these therapies, we’ve turned this fatal disease into a chronic one for most patients,” Batshaw said. “But there’s still no curative approach other than liver transplantation.”

The research isn’t quite ready for human studies, but it is promising.