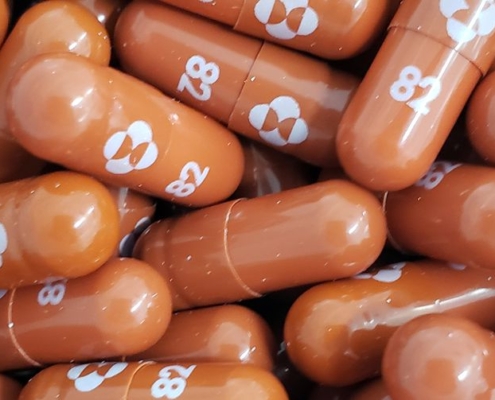 Inside the race to find a COVID-19 treatment pill

In early 2020, as a new deadly coronavirus began spreading around the world, Pfizer Inc (PFE.N) assembled what it called a “SWAT team” of scientists and chemists to identify a potential treatment to fight COVID-19.

The U.S. pharmaceutical giant, which had begun exploring a vaccine, also wanted to produce a pill that could stop the infection from progressing, similar to how the widely-used Tamiflu drug fights influenza. The team scoured Pfizer’s library of molecules looking for unused compounds to help jumpstart the process, and quickly identified a promising candidate.

More than a year later, Pfizer has yet to embark on large-scale human trials of a COVID-19 oral treatment – something it says it hopes to start by July.

Pfizer and its rivals, including U.S.-based Merck & Co Inc (MRK.N) and Swiss pharmaceutical Roche Holding AG (ROG.S), are racing to produce the first antiviral pill that people could take at early signs of the illness. Their shared goal: filling a key treatment hole by helping people recently-infected with coronavirus to avoid becoming seriously ill and needing hospitalization.

But after almost 18 months of the pandemic, there is still no easy-to-administer treatment proven to be effective against COVID-19, the disease caused by the coronavirus. That is despite the development of a number of effective COVID-19 vaccines, including one from Pfizer and German partner BioNTech SE, which in December became the first to gain authorization for use in the United States.

Pfizer’s experience underscores the challenges drugmakers face in developing an oral treatment for the virus. Unlike a vaccine, which needs only to trigger the body’s own immune system, an effective antiviral pill must block a virus from spreading throughout the body while also being selective enough to avoid interfering with healthy cells.

Testing antivirals is also difficult, drug company executives say. A drug needs to be given early in the course of an infection, which means finding trial participants who have recently contracted COVID-19. Many people infected with the virus develop only mild symptoms, but studies need to prove that a drug has a meaningful impact on patient health.

Pfizer Chief Executive Albert Bourla has said the company could seek emergency authorization in the United States for a COVID-19 pill as soon as late this year.

“Right now we have very good reason to believe that we can be successful,” Bourla told an economic forum in Greece via video conference last week.

Pfizer and its rivals say the development process has been much faster than the several years it typically takes to produce a drug that can be taken as a pill.

Merck and Roche recently started late-stage human trials and have also said their drugs could be ready by later this year. Merck is developing its drug in partnership with biotech Ridgeback Biotherapeutics LP and Roche is working with Atea Pharmaceuticals Inc (AVIR.O).

Governments around the world have poured billions of dollars into vaccine development, but Pfizer, Merck and Roche say they have not received government funding to develop oral antivirals for the disease.

‘HUNT FOR THE NEXT TAMIFLU’

While the rate of new COVID-19 infections is currently in retreat in some countries, others continue to struggle with a rapid spread of the virus. And with vaccines in short supply in many countries, much of the world will not be vaccinated for several years. Many people also remain reluctant to take vaccines.

Scientists forecast that COVID-19 – which has killed more than 3.5 million people globally – could become a seasonal disease similar to influenza.

“We need a pill that can keep people out of the hospital,” said Dr. Rajesh Gandhi, a professor and infectious disease specialist at Harvard Medical School.

Doctors have tried a number of existing oral drugs in fighting COVID-19, but none of them have succeeded yet in rigorous clinical testing.

Currently, the only treatments shown to help COVID-19 patients avoid hospitalization are antibody drugs that require lengthy intravenous infusions and work less well against variants of the coronavirus.

Pfizer and its rivals say their oral antiviral candidates could be effective against a broad spectrum of coronavirus variants, but no relevant data has been made public.

For patients already hospitalized with COVID-19, treatment often involves steroids or anti-inflammatory drugs to manage symptoms of the infection, but these medications do not target the virus itself. The only antiviral drug approved in the United States to treat COVID-19 is Gilead Sciences Inc’s remdesivir, which is delivered intravenously and used only for hospitalized patients.

Gilead is currently testing an inhaled form of remdesivir and is exploring other compounds that may be effective oral agents.

“We are all on the hunt for the next Tamiflu,” said Gilead Chief Medical Officer Merdad Parsey.

Tamiflu is recommended for people who have had flu for no more than two days and has been shown to shorten the duration of flu symptoms.

Pfizer’s scientists and chemists began hunting for an antiviral treatment in January last year. They quickly zeroed in on a compound from 2003, when the company had sought a treatment for the first global SARS pandemic, said Charlotte Allerton, Pfizer’s head of medicine design.

The compound belongs to a class known as protease inhibitors, designed to block a key enzyme, or protease, essential to the ability of the coronavirus to multiply. Similar drugs are used to treat other viral infections such as HIV and hepatitis C, both on their own and in combination with other antivirals.

Pfizer’s scientists hit an early stumbling block. Laboratory testing showed the drug candidate was active against the novel coronavirus, known as SARS-CoV-2, but concentrations were not strong enough to combat the virus in humans, Allerton said.

Pfizer continued working with the active component of that compound to formulate a drug that could be given intravenously. But antivirals are most useful if you catch a disease early, “and that isn’t easy with an IV drug,” said Allerton.

In March 2020, Pfizer scientists also started designing a new compound that could be absorbed through the stomach and taken as a pill, which they finalized in July, according to Allerton.

Discovering a protease inhibitor that could be delivered orally was “a bit of a chemistry masterpiece,” said Pfizer Chief Scientific Officer Mikael Dolsten.

Antivirals are more complex to develop than vaccines because they have to target the virus after it is already replicating inside human cells, without damaging healthy cells. COVID-19 vaccines typically teach the human immune system to recognize and attack a portion of the “spike” protein that is specific to the coronavirus.

A COVID pill would likely be taken for only a few days, but drugmakers have had to move slowly to ensure safety. 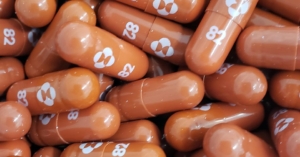 The Merck and Roche drug candidates use different mechanisms to Pfizer’s, and to each other, to disrupt the replication machinery of the virus. But the companies share similar challenges in testing.

One is ensuring a patient receives the drug soon after infection with COVID-19. “It’s all about treating as early in the disease process as possible, when the virus is expanding,” Pfizer’s Dolsten said.

And with vaccination rates high in some regions, trials have to be located in countries where COVID-19 is still on the rise.

In March of this year, Pfizer began early-stage human trials in the United States of its experimental oral COVID-19 treatment, known as PF-07321332. It followed a separate trial by the company of the intravenous drug started last fall.

Dolsten declined to comment on how the pending late-stage trials of either drug will be structured.

Merck’s antiviral drug candidate, called molnupiravir, recently had a setback. The company said last month it would not pursue its use in hospitalized patients. But Merck said it was moving the drug into late-stage trials of a narrow group of non-hospitalized patients – specifically those who have had symptoms for no more than five days and with at least one risk factor for serious disease, such as advanced age, obesity or diabetes.

Merck said it could have definitive data by September or October.

Roche and its partner Atea are also limiting participation in their recently launched late-stage trial of their AT-527 drug to COVID-19 patients experiencing symptoms for less than five days. Atea said final trial results are expected before the end of this year.

Total death toll from Covid-19 could be at least 6-8 million: WHO
Scroll to top