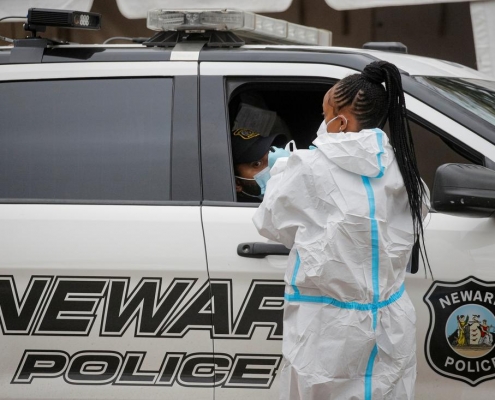 (Reuters) – Several U.S. governors, from the coastal states of New Jersey and California to the heartland of Iowa and Ohio, acted on Monday to restrict gatherings and boost face-coverings in confronting a coronavirus surge they warned is out of control.

Each of the four governors, representing both ends of America’s political divide and a mix of urban and rural regions, cited health data showing the pandemic reaching its most perilous point yet in the United States, threatening to overwhelm hospitals and claim thousands more lives in the weeks ahead.

They acknowledged that tighter limits on social interactions would prove especially difficult through the winter holidays. But without efforts to immediately tamp down the spread of the virus, the governors warned, more drastic action would be necessary in the near future.

Health experts have projected the coming holiday travel season and the onset of colder weather, with more people tending to congregate indoors, is likely to worsen the situation.

More than 70,000 Americans were hospitalized for treatment of COVID-19 as of Monday, the most ever at any time since the pandemic began, according to a Reuters tally of public health figures.

The number of U.S. infections documented to date surpassed 11 million on Monday, a little more than a week after crossing the 10-million mark – the fastest time it has taken for the national tally to grow by a million cases.

The spike in cases and hospitalizations has been especially striking in places like Iowa, a largely rural, Midwestern Corn Belt state spared the worst ravages of the pandemic when it began eight months ago.

Iowa, for example, has registered more than new 52,000 infections over the past two weeks, about the same number documented from March to mid-August, with COVID-19 accounting for one in every four patients now hospitalized in the state.

“No one wants to do this,” Iowa Governor Kim Reynolds, a Republican, said in announcing that all indoor gatherings for social, leisure and community events will be limited to 15 people, with outdoor gatherings limited to 30, weddings and funerals included.

In addition, Iowa’s restaurants and bars will be ordered to close by 10 p.m., and masks will be newly required for anyone spending at least 15 minutes in an indoor public space without being able to socially distance, the governor said. 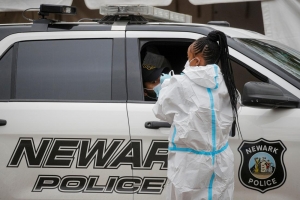 A healthcare worker takes a swab from a Newark Police officer sitting in a car at a drive-thru COVID-19 test center, during a surge in the coronavirus disease (COVID-19) infections in Newark, New Jersey, U.S., November 12, 2020. REUTERS/Brendan McDermid

Reynolds said success hinged on public cooperation rather than enforcement.

“If Iowans don’t buy into this, we lose,” Reynolds told a news conference. “Businesses will close once again. More schools will be forced to go online, our healthcare system will fail, and the cost in human life will be high.”

Similar messages were delivered on Monday by the Democratic governors of California and New Jersey, and their Republican counterpart in Ohio.

Some of the most aggressive new actions to confront the crisis were being taken at the local level, such as in Philadelphia, the nation’s sixth most populous city.

Officials there on Monday ordered a ban on “indoor gatherings of any size in any location, public or private,” except among individuals who live together.

“We need to keep this virus from jumping from one household to another,” city Health Commissioner Thomas Farley told a news conference.

If the current rate of “exponential” growth in cases continues, hospitals will soon be strained to their limits and more than 1,000 people could die in Pennsylvania’s largest city over the next six weeks, Farley said.

In neighboring New Jersey, one of the hardest-hit states in the early phase of the pandemic, Governor Phil Murphy said he was ordering gatherings of people from different households limited to 10 indoors, down from 25, while the mandatory cap on outdoor gatherings will be lowered to 150 from 500.

Across the country, California Governor Gavin Newsom said he was applying “emergency brakes” to his reopening plan, citing a doubling in the daily number of COVID-19 cases reported across the state over the past 10 days.

Under Newsom’s announcement, commercial and social restrictions will be tightened starting Tuesday in 40 of the state’s 58 counties, covering the vast majority of its 40 million residents.

The crackdown means no indoor service in bars and restaurants and more restrictions on many other businesses and public gatherings. California is also strengthening its face covering guidance to require individuals to wear a mask whenever outside their home, with limited exceptions, Newsom said.

In Ohio, where daily case tallies have increased by 17% and total hospitalizations by at least 25% in the past week, the state’s health department issued a revised order to limit mass gatherings starting on Tuesday, Governor Mike DeWine announced.

The flurry of measures came as 40 states have reported record daily increases in COVID-19 cases this month, while 20 states have registered all-time highs in daily coronavirus-related deaths and 26 reported new peaks in hospitalizations, according to the Reuters tally.