As the J.P. Morgan Healthcare Conference continues to roll on with companies showcasing their pipelines and business plans for the next year, it was only a question of when, not if, reports about the host city would begin to be made. 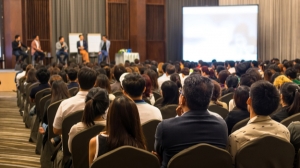 During the conference last year, reports circulated regarding the high price of coffee, hotel rooms, meeting space and other sundries in the area around the conference center. This year, those same criticisms are being raised. But alongside criticisms of those high prices for conference attendees comes reports of the “squalor” found in the Bay Area, particularly the high number of people living on the streets of San Francisco. Bloomberg noted that pharma executives and venture capitalists are hobnobbing at parties “while stepping around people living in cardboard boxes.” Stephen Ubl, chief executive officer of the powerful trade organization Pharmaceutical Research and Manufacturers of America, told Bloomberg that the issues in San Francisco come up with group members each year ahead of the conference. Ubl told the publication that the problems are compounded annually each year and added that “it’s outrageous.”

While the conditions surrounding the City by the Bay are in a negative light, there is still a significant amount of positive news coming out of the conference.

Galapagos Expands Fibrosis Program – Belgium’s Galapagos NV expanded its collaboration with Canada’s Fibrocor to in-license four additional fibrosis programs and also take an equity stake in the company. The announcement expands a collaboration initially struck this time last year for a small molecule inhibitor program focused on an undisclosed fibrotic target. For the four targets, Galapagos said two have already been identified but did not disclose them in the announcement. Galapagos can lift the option after the targets have been validated and brought into drug discovery. Fibrocor will remain responsible for all research activities until lead optimization, after which Galapagos will take over further development. In exchange for global commercialization rights to Galapagos, Fibrocor will receive an upfront payment, and is eligible for option exercise payments as well as further milestone and royalty payments.

“The discovery approach at Fibrocor is clearly successful in identifying interesting novel targets, and we are fully committed to working closely with the Fibrocor team to discover new therapies to address the large unmet medical need in fibrosis,” Piet Wigerinck, chief scientific officer at Galapagos, said in a statement.

Viatris Lays Out the Future – At J.P. Morgan, the leaders of Viatris, the combination of Mylan and Pfizer’s Upjohn, laid out the groundwork for the coming year to create a “new global healthcare gateway.” The combined companies will have about 50 manufacturing sites across the world that will provide a significant reach into global markets. Within the fourth year of the new company, Viatris anticipates approximately $3 billion in additional revenue from new products that will be launched. Of those, about two-thirds will be complex generics drugs, biosimilars and global key brands, the company said during a presentation at JPM. When the new company launches this year, it is expected to have revenues of $20 billion. Viatris, which was formed in July, will have numerous well-known brands in its portfolio, including the Epi-Pen, Viagra, Lipitor, Celebrex and others.

Alkermes Plans for the Next Year– Entering JPM fresh off its acquisition of Rodin Therapeutics and its small molecule therapeutics for synaptopathies, Alkermes is positioning itself for long-term growth driven by its two approved products, Vivitro, Aristada and Vumerity and, what its (hopefully for the company) soon-to-be-approved ALKS-3831, a treatment for bipolar disorder. Looking at its Rodin acquisition, Alkermes Chief Executive Officer Richard Pops said during a presentation Wednesday morning that it was focusing its investments in this deal into high-potential R&D programs. As BioSpace reported at the time of the acquisition, Alkermes plans to advance Investigational New Drug (IND)-enabling activities for several of Rodin’s preclinical assets, potentially prioritizing them ahead of future clinical development of Rodin’s initial clinical candidate. The Ireland-based company also sees growth potential from its recently introduced IL-10-Fc program and histone deacetylase (HDAC) inhibitors.

SOPHiA Teams Up With IDT — SOPHiA Genetics and Integrated DNA Technologies (IDT) struck a deal at JPM to increase access to clinical grade technologies. The companies will pair IDT’s reagents with the SOPHiA universal analytics platform to detect and characterize genomic variants and provide those insights to the larger healthcare community. Additionally, users will be able to take advantage of the SOPHiA Set-Up Program which is designed to support the implementation of Next-Generation Sequencing (NGS)-based testing for genetic diseases, the companies said. IDT and SOPHiA GENETICS have teamed up before. The two companies developed a first of its kind In Vitro Diagnostics marked SOPHiA Hereditary Cancer Solution in 2016. SOPHiA GENETICS has launched several additional IVD solutions since then, providing simple and fast procedures for healthcare professionals committed to serving patients by bringing clinical diagnostics in-house.

“Our strong relationship with IDT has enabled us to further accelerate the democratization in clinical genomics and better serve patients around the world. The universal SOPHiA Platform and genomic solutions make us the partner of choice for best-in-class reagent providers to bring end-to-end, highly-accurate and reliable outcomes to their clients. With the combined powers of SOPHiA’s high performance analytical capabilities and the world-class products that IDT has pioneered, many diseases the world currently faces may soon become more manageable and far easier to detect. The future of precision medicine is made brighter with this collaboration,” Jurgi Camblong, CEO and co-founder of SOPHiA said in a statement.