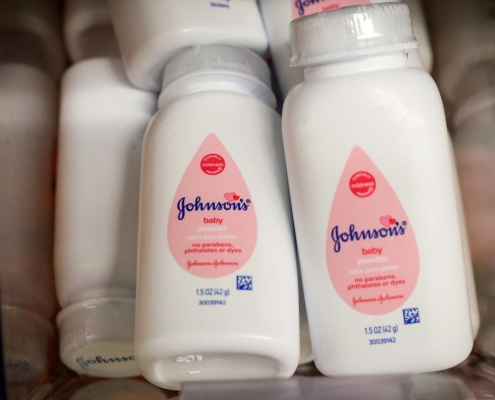 (Reuters) – Johnson & Johnson will stop selling its talc Baby Powder in the United States and Canada, it announced on Tuesday, saying demand had fallen in the wake of what it called “misinformation” about the product’s safety amid a barrage of legal challenges.

J&J faces more than 19,000 lawsuits from consumers and their survivors claiming its talc products caused cancer due to contamination with asbestos, a known carcinogen. Many are pending before a U.S. district judge in New Jersey.

“I wish my mother could be here to see this day,” said Crystal Deckard, whose mother Darlene Coker alleged Baby Powder caused her mesothelioma. She dropped the suit filed in 1999 after losing her fight to compel J&J to divulge internal records. Coker died of the cancer in 2009.

In its statement, J&J said it “remains steadfastly confident in the safety of talc-based Johnson’s Baby Powder,” citing “decades of scientific studies.”

J&J has faced intense scrutiny of the safety of its baby powder following an investigative report by Reuters here in 2018 that found the company knew for decades that asbestos lurked in its talc.

Internal company records, trial testimony and other evidence show that from at least 1971 to the early 2000s, the company’s raw talc and finished powders sometimes tested positive for small amounts of asbestos. (here)

The Reuters article prompted a stock selloff that erased about $40 billion from J&J’s market value in one day and created a public relations crisis as the healthcare conglomerate faced widespread questions about the possible health effects of one of its most well-known products.

“My Subcommittee’s 14-month investigation revealed that Johnson & Johnson knew for decades that its product contains asbestos,” he said.

In response to evidence of asbestos contamination presented in media reports, in the court room and on Capitol Hill, J&J has repeatedly said its talc products are safe, and do not cause cancer.

The company said on Tuesday that its decision to discontinue talc-based Baby Powder in North America was not connected to any of those investigations.

Apart from the baby powder controversy the company, one of the most trusted brands in America, more recently has faced a series of legal and reputational challenges.

J&J has said it has been named as a defendant, along with other drugmakers, in more than 2,900 lawsuits alleging the companies improperly promoted addictive opioids. 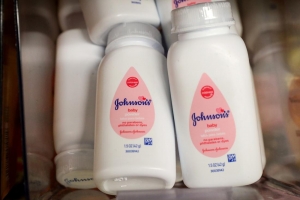 In August, an Oklahoma judge rendered the first verdict in that litigation, ordering J&J to pay $572.1 million to the state for its part in fueling an opioid epidemic by deceptively marketing addictive painkillers.

J&J is appealing the Oklahoma judge’s ruling and has denied it caused the opioid crisis.

The company said on Tuesday said it had stopped shipping talc baby powder when the COVID-19 crisis led to limits on shopping and manufacturing, and that now it would wind down North American sales.

“Demand for talc-based Johnson’s Baby Powder in North America has been declining due in large part to changes in consumer habits and fueled by misinformation around the safety of the product and a constant barrage of litigation advertising,” it said in a statement.

Sold continuously since 1894, Johnson’s Baby Powder now accounts for only about 0.5% of its U.S. consumer health business, the company said. But it remains a symbol of the company’s family-friendly image.

An internal J&J marketing presentation from 1999 refers to the baby products division, with Baby Powder at the core, as J&J’s “#1 Asset,” grounded in “deep, personal trust” and a 2003 internal memo described it as a “sacred cow,” Reuters reported.

Christie Nordhielm, a professor of marketing at Georgetown, said it appears J&J made its decision to withdraw from the market while consumers were preoccupied with the pandemic. “It’s a nice time to quietly do it,” she said, adding “it will minimize the reputational hit.”

“We will continue to vigorously defend the product, its safety, and the unfounded allegations against it and the Company in the courtroom,” Johnson & Johnson said. “All verdicts against the company that have been through the appeals process have been overturned.”

Krystal Kim, one of 22 women with ovarian cancer whose case in St. Louis resulted in a 2018 jury verdict of $4.69 billion against J&J, said the decision to discontinue the products was “a step in the right direction.” J&J has appealed that verdict.

In April, a New Jersey judge ruled that thousands of plaintiffs who allege J&J’s talc products caused cancer can go forward with their claims, but face limits on what expert testimony would be allowed in trials.

Asbestos is known to cause cancer that emerges decades after exposure. Cases involving asbestos-containing products removed from the marketplace long ago “continue to be litigated very actively to this day,” Zimmerman said.

Alexandra Lahav, a law professor at the University of Connecticut, said J&J’s decision could help the company reduce the amount of punitive damages by jurors in future trials, however, as those awards are frequently driven by jurors’ desire to punish a company’s ongoing conduct.